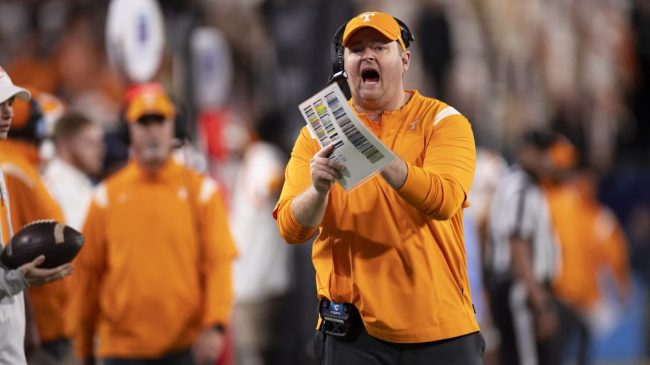 Things are looking up for the Tennessee Volunteers. That’s in part because there was only one way for things to look after recent years. But also in part because of second-year head coach Josh Heupel.

The Vols are long past their glory days under coaching Phillip Fulmer. Since Fulmer’s retirement in 2008, Tennesee has had just six winning seasons. They’ve not won 10 games since 2007 and it’s been since 2004 since the Volunteers last appeared in the SEC Championship Game.

But now, with Heupel at the helm and NIL playing its part, Tennessee finally looks to be back on the right track.

The Volunteers went just 7-6 in their first year under Heupel. But they’re 2-0 in the young 2022 season and ranked No. 15 in the AP Poll after a thrilling 34-27 overtime win over Pitt in week two.

Now Heupel it appears those in charge are ready to reward Heupel for his good work. But fans are a little gun-shy.

Brent Hubbs of On3 Sports reported Friday morning that Heupel agreed to a new deal with the Vols that pays him over $5 million per year.

JUST IN: @coachjoshheupel has agreed to a new deal with @Vol_Football that puts him over 5 million per year, which is a million dollar raise. Plus other raises for the football staff. ⬇️⬇️⬇️⬇️https://t.co/6VMVtyTtlD

Vols fans were immediately wary of the new deal.

Can't you just figure out whether or not he can be 9 and 3 before you do something like this… https://t.co/vKhvqmNTBX

Maybe a little early.. things could still fall apart like they did with Butch (to be fair Heupel is already out-performing what Butch did in year 2). I don’t hate it. Why not make sure we try to keep this staff intact while things are headed in the right direction? https://t.co/aiEkxJxfVA

I just don’t get giving a raise 2 games into a season.

By just about every account, Heupel has done a wonderful job with what he inherited. Stock is certainly rising, but the timing of this seems…early? https://t.co/6mqFgBchUc

The concern is understandable when you look at Tennessee’s coaching history after Fulmer. Lane Kiffin took the job for one year before bolting for USC. Derek Dolley then took the helm for threes season before being fired.

Jones’ replacement Jeremy Pruitt was no better. Pruitt had just one winning season in three years with the Vols and was fired in 2020 after an embarrassing 3-7 record.

Things on ol’ Rocky Top look to be back in order under Heupel, but fans clearly have their guard up after being tricked one too many times.