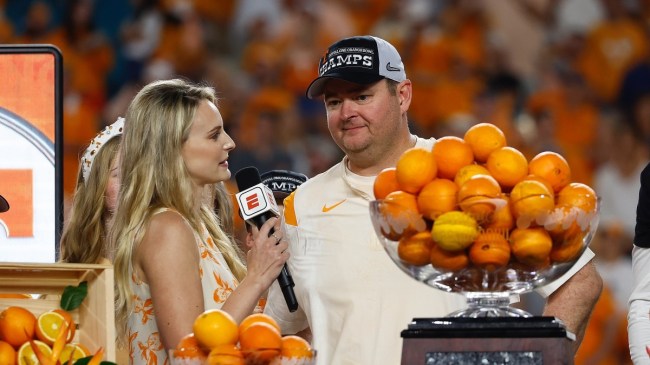 It was a great year for the Tennessee Volunteers. While they stumbled down the stretch, the program capped off its first 11-win season since 2001.

A lot of that had to do with the sensational play of quarterback Hendon Hooker. Before getting hurt in the second-to-last game of the season, he threw for over 3000 yards with 27 touchdowns and just 2 interceptions.

But, he only did that under the tutelage of head coach Josh Heupel. Heupel was sensational in his second season in Knoxville. The offensive development was astonishing, and their offense went up and down the field on Alabama in their dramatic win in October. He’s now considered one of the best young coaches in the game, and the former Oklahoma quarterback and 2000 Heisman runner-up deserved a big raise.

Tennessee already gave him one raise back in September.

JUST IN: @coachjoshheupel has agreed to a new deal with @Vol_Football that puts him over 5 million per year, which is a million dollar raise. Plus other raises for the football staff. ⬇️⬇️⬇️⬇️https://t.co/6VMVtyTtlD

But, they’ve decided to go bigger.

That’s quite a chunk of change. But, it’s well-deserved. He’s also recruiting well. Nico Iamaleava is rated by On3 as the top recruit in America, and he will be the quarterback of the future for the Vols.

Congrats to Josh Heupel for getting two raises in five months.