Terrell Owens Dunks On Antonio Brown, Wants Absolutely Zero Part Of Being Compared To Him 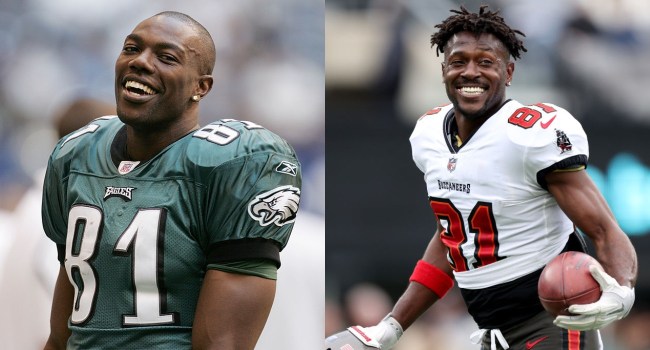 As soon as Antonio Brown made his way back to the NFL with the Tampa Bay Bucs last year, it was a question of when — not if — it would all come crashing down, as the potential future Hall of Famer is seemingly incapable of not self-destructing. Granted, to show some compassion to Brown — and echoing the sentiment shared by Tom Brady following the game — he is clearly struggling with some mental health issues that have yet to be properly treated. I am, obviously, nowhere near qualified enough to speak on said issues, so we’ll leave it at that.

“We all love him and care about him deeply. I think everyone should be compassionate and empathetic toward some very difficult things,” Brady said to reporters following the Bucs’ 28-24 victory over the New York Jets.

Nevertheless, because of his antics, Brown is making headlines once again, which is what lead to this comment from Hall of Famer Terrell Owens, who clearly wants ZERO part of being compared to the mercurial wide receiver.

Replying to a tweet that asked the question which of the two is the bigger diva, Owens (who is third all-time in receiving yards with 15,934, behind only Jerry Rice and Larry Fitzgerald — Brown is currently 24th all-time) said “Wow. Respectfully and Disrespectfully, there’s no comparison. Clearly you’ve been drinking the kool-aid.”

In addition to receiving yards, Owens also has more catches than Brown (1,078 to 928) and touchdowns (153 to 83). To his credit, Owens also never had as many off-the-field issues as Brown, either, as most of the controversies he created — from his touchdown celebrations to allegedly spitting at cornerback DeAngelo Hall — occurred on the field and during games.

RELATED: Antonio Brown Reportedly Told Bucs Coaches He Couldn’t Play Because He Was Injured And They Responded By Kicking Him Off The Sidelines