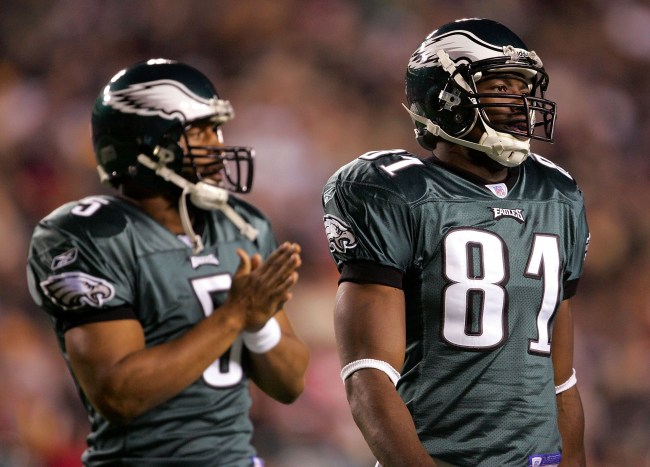 Former teammates Terrell Owens and Donovan McNabb apparently still hate each other after all these years.

Earlier this year, McNabb appeared on Bleacher Report’s “Untold Stories” with Master Tes and blamed Owens for breaking up the 2005 Eagles team that made it to the Super Bowl.

The lead into the following year, I’m thinking [Owens] will be back healthy, we have [Jevon Kearse], we have guys elevating their game, gaining experience, and I’m thinking, ‘We’re going to be back.’

Then the offseason goes on and all of a sudden there’s turmoil here and there, different conversations going back and forth, and we had to answer those questions instead of focusing on what we need to do in order to get back to where we were. I thought that was the major distraction for us.

He’s doing sit-ups, he’s doing push-ups, he’s playing basketball, he’s ordering pizza for the people out there, and we’re sitting there in training camp just like, ‘You’ve got to be kidding me.’ We’re in our dorm rooms, and I’m just sitting there watching on TV. Brian Dawkins and Jeremiah Trotter were my roommates, and Dawk would come in like, ‘What’d he do now?’ I’m like, ‘Take a look.’ This is like “Days Of Our Lives”. It was unbelievable. But that was something that kind of broke us up. That was the most frustrating for me, because I knew what we could do, and, if we decided to just come together, what we could accomplish.

Owens was not happy with McNabb at the time and vowed to air out his former teammate’s dirty laundry in public.

Hey @MasterTes!! Let me know when u want to hear the truth!! Did u ask him about those DUIs and what he was doing at the parties I threw at my house during “our time” in Philly?!! Hmmm Don’t worry, I’ll tell ya!! ✌🏾✌🏾 https://t.co/jU8aGymIfD

T.O. made good on his promise and went on Untold Stories this week to confirm the long-standing rumor that McNabb threw up in the huddle during the team’s Super Bowl game in 2005 because he was hungover.

T.O. says he “knows for a fact” that Donovan McNabb was out drinking the night before the Eagles played in Super Bowl XXXIX

Knowing all this information I think that it was irresponsible, knowing someone of his caliber and his status of obviously being the leader of the team.