Terrell Owens Threatens To Expose Donovan McNabb’s Dirty Laundry After McNabb Said T.O. Was The Reason The Eagles Broke Up 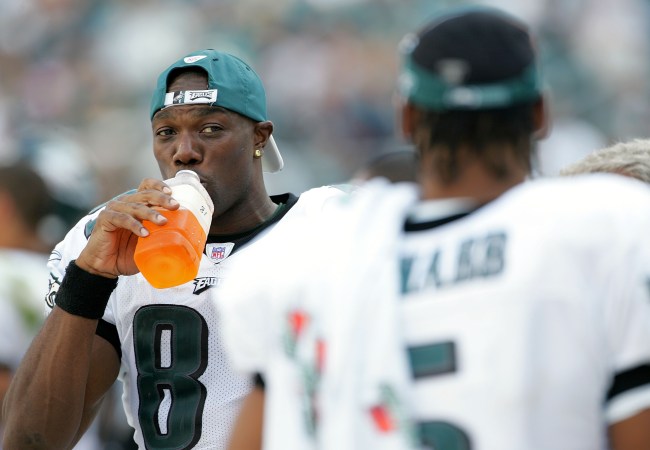 It’s been 15 years since they last played on the same team but Terrell Owens and Donovan McNabb still can’t get along.

In a conversation with Master Tes of Bleacher Report, McNabb blamed Owens for breaking up the 2005 Eagles team that made it to the Super Bowl.

Untold Stories with Donovan McNabb@donovanjmcnabb shares what it meant to be the 3rd black QB to start in the Super Bowl.

He thought the Eagles would be back after losing to the Patriots, but @terrellowens “Days Of Our Lives” saga “kinda broke us up.”pic.twitter.com/yEFOAEOb6a

The lead into the following year, I’m thinking [Owens] will be back healthy, we have [Jevon Kearse], we have guys elevating their game, gaining experience, and I’m thinking, ‘We’re going to be back.’

Then the offseason goes on and all of a sudden there’s turmoil here and there, different conversations going back and forth, and we had to answer those questions instead of focusing on what we need to do in order to get back to where we were. I thought that was the major distraction for us.

He’s doing sit-ups, he’s doing push-ups, he’s playing basketball, he’s ordering pizza for the people out there, and we’re sitting there in training camp just like, ‘You’ve got to be kidding me.’ We’re in our dorm rooms, and I’m just sitting there watching on TV. Brian Dawkins and Jeremiah Trotter were my roommates, and Dawk would come in like, ‘What’d he do now?’ I’m like, ‘Take a look.’ This is like “Days Of Our Lives”. It was unbelievable. But that was something that kind of broke us up. That was the most frustrating for me, because I knew what we could do, and, if we decided to just come together, what we could accomplish.

Owens saw McNabb’s interview with Tes and lost his mind.

The former Eagles wide receiver blasted McNabb for having a drinking problem and threatened to expose McNabb’s dirty laundry in public.

Hey @MasterTes!! Let me know when u want to hear the truth!! Did u ask him about those DUIs and what he was doing at the parties I threw at my house during “our time” in Philly?!! Hmmm Don’t worry, I’ll tell ya!! ✌🏾✌🏾 https://t.co/jU8aGymIfD

Yes sirrrr! Grab a seat. And just like him, I handle grown man business. He didn’t want this smoke when I asked him after me & Hugh got into it that day but the same offer stands for him today as it did 16 years ago. 😎 This guy??!!! 🙄 He must be sober now?? 🤷🏾‍♂️ 😂😂😂 https://t.co/oLybeymLHD

Don’t fall for this BS! He brought this up!! Bro u can think what u want about me. I’m good. I know who I am & what I did in locker rooms. Answer this, what players have validated that I was a bad teammate or u just going by what the media says? 🤷🏾‍♂️ https://t.co/SG4mto83nZ

Owens went as far to imply that McNabb was out drinking the night before the Eagles 2005 Super Bowl and that was the reason why he threw up during the game.

.@MasterTes Along with the sharing of what it meant to be the 3rd black QB to start in the Super Bowl but did he share that he was and is the “FIRST and ONLY” QB, black or white, to throw up in the huddle?! 😂😂😂
Oh yeh! Just found out why he was throwing up too. 🤷🏾‍♂️🍿 https://t.co/NsXPfCeF49

Despite Owens’ accusations, McNabb has always been adamant he didn’t vomit during Super Bowl 2005 despite several Eagles players confirming that it happened.

No, I didn’t puke. It’s unfortunate that we still talk about this 11 years after playing in the Super Bowl. But, no. That did not happen and hopefully we can stop talking about it. Once again, go watch the game tape,”

It doesn’t appear that McNabb and Owens are going to end their feud anytime soon.