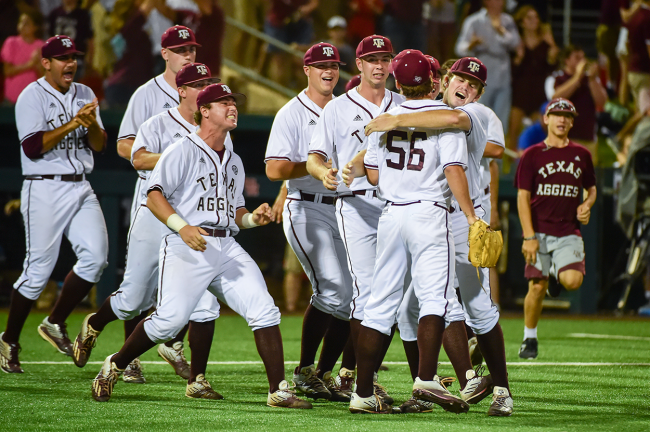 Texas A&M baseball is headed to the College World Series. After playing their way into a top national seed, the Aggies dominated their home Regional with three-straight wins and swept Louisville with two-straight wins in their home Super Regional.

Following an impressive 19-11 record in-conference, Texas A&M has been dominant in everything they do this postseason. All of the way down to the Powerade bath.

The Aggies held off the Cardinals in consecutive one-run games on Saturday and Sunday to earn a bid to Omaha. Once the game was over, the team exploded onto the field to celebrate in front of a sold-out crowd.

POV: your favorite team just clinched a spot in the #MCWS 🤳

We wanna see allllll the different angles from the #12thMan’s perspective. Reply or QT with what ya got, we’ll share our faves! 👀#GigEm pic.twitter.com/GjQbU780WZ

After the mosh pit subsided and players got their College World Series-bound hats, it was time for one of the best traditions in sports— dumping the cooler on the head of the head coach.

In this case, Jim Schlossnagle never saw it coming. The Aggies executed their plan to perfection.

While freshman pitcher Chris Cortez, who has played a significant role with the team, went up to his head coach and gave him a big hug, the other players got the cooler ready. Cortez held Schlossnagle in a hug that lasted maybe a little bit too long, but it was on purpose.

As he held Schlossnagle in one place, the other Aggies absolutely drenched him.

In a world where coaches are aware of the Powerade cooler baths that are coming, many of them are able to duck out of the way. Schlossnagle was not. He got got.