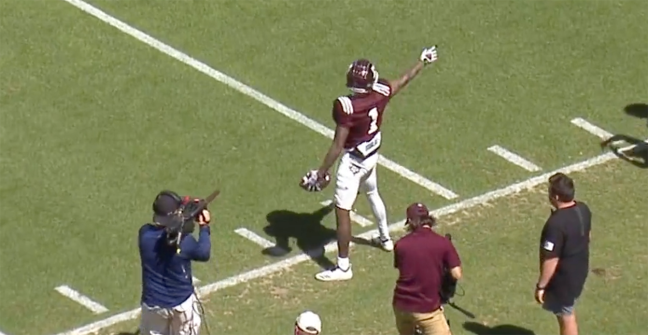 Texas A&M landed the greatest recruiting class in the history of college football in 2022. The Aggies landed eight five-star commits in the class and wide receiver Evan Stewart was one of them.

Stewart, the top-ranked player at his position, hails from Frisco, Texas. He stands 6-foot-0, 175 pounds and has a ridiculous athleticism.

After choosing A&M over Florida, Texas, Alabama and Arkansas, among others, Stewart enrolled early to participate in spring practice at his new school. Once he arrived on campus, he immediately made an impact.

Throughout all of spring ball, the reports out of College Station were that Stewart was causing problems for defensive backs. He was tearing it up in practice and backed up the hype during the Aggies’ spring game.

The true freshman led the team with seven catches for 75 yards during the Maroon and White game. Stewart’s best play came when he went up over his defender and ‘Mossed’ him for a vicious snag.

The lone bright spot I came away with from watching the Texas A&M spring game was freshman WR Evan Stewart. Created space throughout game and had this terrific catch showcasing his body control and high point ability. pic.twitter.com/c3bWUNdXDW

It was made very clear that Stewart will be a large part of the offense this fall and they got him the ball in space as often as possible.

As a result of his strong day, the five-star receiver earned Offensive MVP honors.

Now that the spring has wrapped and the semester is over, the Aggies are back home. That isn’t stopping Stewart from putting in that work.

Now, there is no telling where A&M will finish in the SEC, but the pressure is on. Stewart will need to have a big year if the Aggies want to finish near the top of the conference. It looks like he is well on his way.