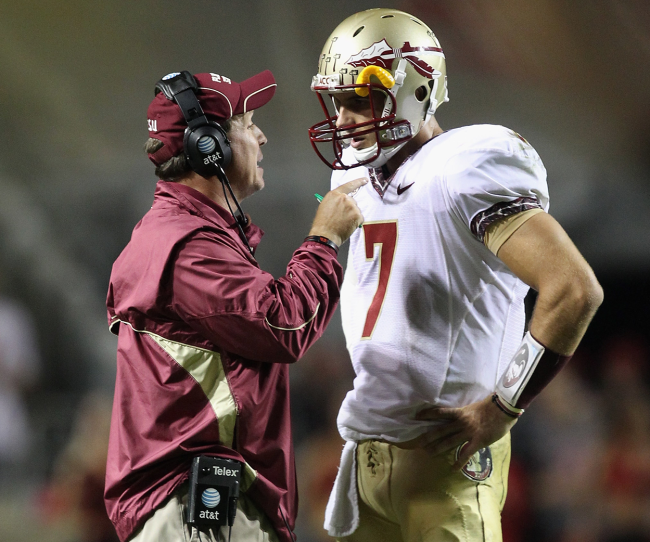 Texas A&M is set to host one of the top quarterbacks in the Class of 2023 this weekend. Jaden Rashada, a four-star prospect with offers from Power Five schools all over the country will be in College Station from June 3rd to June 5th.

Ahead of his visit, the school’s Director of Player Personnel posted a graphic that may or may not have been catered to Rashada. It probably was. Either way, it was in direct reference to the quarterback position.

Specifically, the graphic spoke to the quarterbacks that have played under head coach Jimbo Fisher, who was at Florida State up until 2018 and at LSU before his time with the Seminoles. The DPP also asked why a quarterback would choose a program other than A&M based on Fisher’s history with quarterbacks.

It did not over well and the Aggies proceeded to get roasted. Here is the graphic:

While the $135,000,000 made by the 10 quarterbacks is undeniably impressive, the track record of those 10 quarterbacks is not so much. And $61 million of that number was from Jamarcus Russell’s rookie contract, which ended up being one of the worst deals in history.

Here is how the 10 quarterbacks who played under Jimbo Fisher listed on the Texas A&M graphic fared in the NFL:

And yet, Texas A&M is promoting Fisher’s track records with quarterbacks as if it is remarkably impressive. It is not and they proceeded to get roasted.

These guys really put Jamarcus Russell, one of the biggest NFL busts of all time on a recruiting graphic then said why not come here lmao https://t.co/xoE27b9lzZ

I can’t even make fun of this bc it’s so bad. https://t.co/LrK0mBiGnb

No shot yall think this is a flex

I honestly can’t tell if you’re serious or trolling your own program.

Jamarcus Russell represents a 1/3 of that dollar amount 😂. Talk about sending the wrong message.

LOL. “Why not?” The proof is in the pudding

What, exactly, are you trying to say w/this abomination???

So this is a list of colossal failures in the NFL??

Bro all these QBs on this graphic suck 😂

Absolutely brutal for the Aggies. They got flambéed.