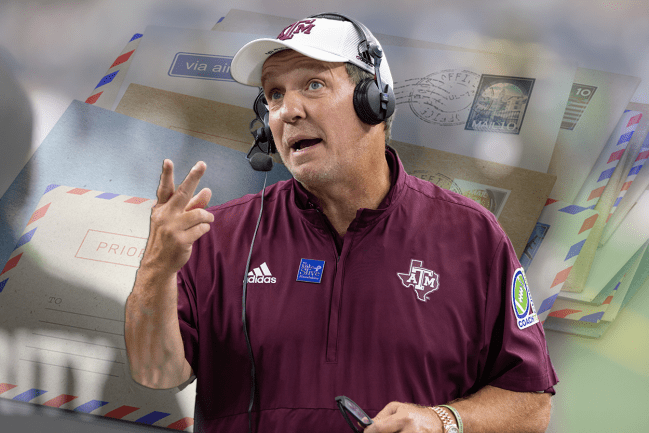 Texas A&M football has plenty of talent and plenty of money, but apparently, it needs to reload on stamps. As the never-ending recruiting cycle continues, one high school football coach put the Aggies on blast on Monday afternoon for their postage problems.

J.J. Kavanaugh, the head coach at North Caddo, received a recruiting packet from the program in the mail. Not only did the envelope lack his name, which is fairly standard but extremely impersonal, it lacked the proper amount of stamps— the packet seemed to require two stamps but only had one.

Written in big letters and circled on the front of the packet, there was a request for $0.98 due in postage. Kavanaugh, though grateful for the correspondence, made it very clear that he was not going to pay for A&M’s mistake.

Thank you to Texas A&M for recruiting North Caddo Football. However, with all due respect I will not be paying for your postage. pic.twitter.com/SsJWu4NAHK

Of course, the response was widespread across Twitter and there were all kinds of jokes about A&M running out of money, or paying millions for their recruiting class but not for stamps. In the end, it made for a hilarious moment that provided yet another good laugh at the Aggies’ expense.

Now, more than likely, it was just a mistake made by an intern or low-ranking staffer in the recruiting office. He or she probably forgot to double stamp.

But maybe the whole thing could have been avoided if the program ponied up some big bucks for a stack of Forever Stamps? That way there will never be another issue in which a high school coach is asked to pay for A&M’s postage ever again. OOPS!