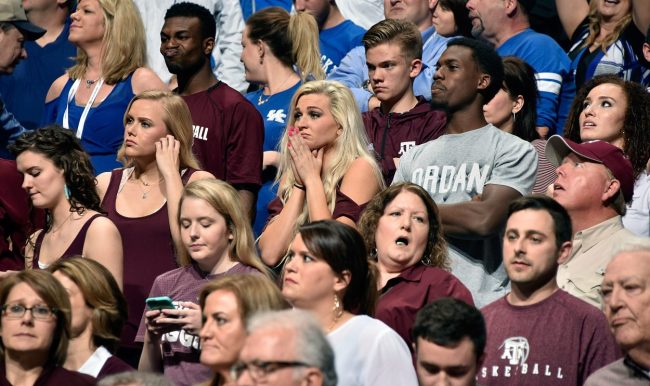 Texas A&M basketball had one of its biggest games in recent history on Wednesday night. The Aggies, at 15-2, hosted the 14-3, 12th-ranked Kentucky Wildcats in front of a packed house at Reed Arena in College Station.

With 14,036 in attendance, it was the largest crowd in the program’s history. The atmosphere was electric. (But very cult-like, because A&M.)

After a back-and-forth first 20 minutes, A&M took a five-point lead into the locker room at the break. As a result, the crowd remained in an absolute frenzy when the halftime performers took the court.

It just so happened to be the most Texas halftime show of all-time.

A co-ed country swing dance and stunt team from J.J. Pearce High School in Richardson, TX took the court on Wednesday night and performed their routine in Texas flag shirts, cowboys hats and cowboy boots. It’s so, so, so Texas.

For your Aggie halftime enjoyment in College Station… pic.twitter.com/VAuoBc6Phi

Although much of the performance is about having fun, they also perform some incredibly impressive and athletic stunts. Female counterparts joined the Texas-flag-wearing men on the court and had the crowd “ooing” and “aahing” as they danced to ‘God Bless Texas.’

The cheering is well deserved, as the performance is incredibly athletic and very impressive. But, again, it is so Texas that it hurts.

This is not to knock the performers. What they do is very entertaining and requires a lot of work. They deserves recognition for how good they are. They are VERY GOOD at what they do.

For a school that already gets labeled as a cult (because it is) and gets made fun of for their incredibly cringey, all-male cheerleaders, Wednesday’s halftime show is not helping in the stereotype department. Texas A&M is so cringingly Texas that it hurts.

To make things worse, the Aggies went on to lose to the Wildcats by six.