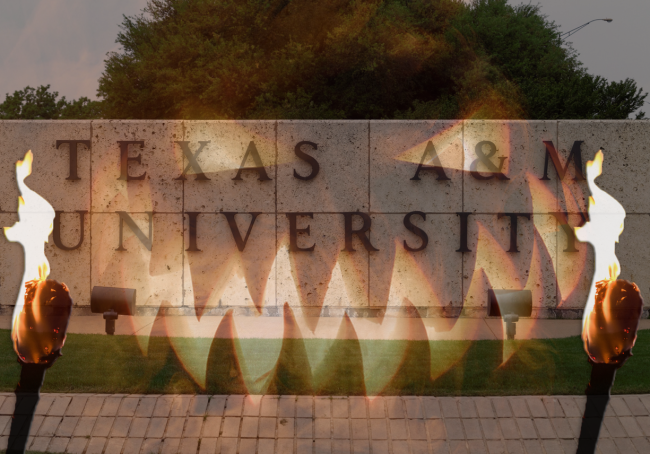 Texas A&M University is a cult and the ‘Flight of the Great Pumpkin’ is the perfect example. As are the school’s “Yell Leaders,” but that’s an entirely different story.

In 1876, Texas A&M was established as a military institution. Thus, the Corps of Cadets has played an important part in the university’s history.

While membership used to be mandatory, participation in the Corps became voluntary in 1965. However, even today, the cadets form the largest uniformed body of students outside of the U.S. military academies with over 2,500 participants.

Known as Company C-2, the Corps has a lot of storied traditions in College Station. One of those rituals has recently gone viral and it is incredibly cult-like.

Each year, ahead of Halloween, Company C-2 participates in the ‘Flight of the Great Pumpkin.’ Take a look, it’s terrifying:

This year, Company C-2 held the Flight of the Great Pumpkin on October 26, 2021 and the story dates back more than 50 years. It is the oldest tradition in the Corps and its history is absolutely wild.

What is the Flight of the Great Pumpkin?

According to The Battalion, the story of ‘Flight’ started in 1963. It stems from upperclassmen looking for things to do at expense of the “fish.”

“Fish” are the freshman cadets.

Each fall, the company would hold an apple bobbing amongst the fish. Those who turned up without an apple would be wrapped in a white sheet and forced to run through a gauntlet of upperclassmen holding flaming brooms with a pumpkin on his head.

The Flight of the Great Pumpkin was born.

Since then, it has gone through quite a few changes. At one point, it became a competition between the Fightin’ Texas Aggie Band and the Company C-2.

Freshman would run around with pumpkins on their heads inside the band dorm and the upperclassmen would try to smash the pumpkins with axe handles. That’s a real thing that used to happen.

Eventually, the event reached its boiling point and it escalated into a full-on brawl between C-2 and the Aggie Band. As a result, the Flight experienced a period of hiatus before coming back as its current form.

Now, it’s no fights, all cult.

C-2 marches with their pumpkins and torches, leading one ‘Great Pumpkin’ who is wrapped in a white cloth through the quad, before smashing the pumpkins on the ground. The band was reintroduced in 2015 and plays music while C-2 participates in the Flight, so this is a university-condoned event.

They encourage the cult-like activity. Here is what it looked like in 1989:

Many people found out about the ritual this year and, as is to be expected, they could not believe that it’s a real thing. They also found it hilarious that Texas A&M tries to claim that it is not a cult after seeing the video.

Texas A&M is a cult pic.twitter.com/V7jCBUUF0Q

Everyone says they want to beat Bama but only one school is willing to do the satanic rituals required to pull it off pic.twitter.com/GVuWygM3t7

Texas A&M could be a bigger cult than religion itself https://t.co/jxSXoAeZJB

Add “Flight of the Great Pumpkin” to the long list of c̶u̶l̶t̶ ̶a̶c̶t̶i̶v̶i̶t̶i̶e̶s̶ ̶ traditions at Texas A&M.pic.twitter.com/ts82dIXJp9

A&M is so much more cult-like than any school I’ve ever seen https://t.co/WQVt58SIOR

I’m glad we are all in agreement, because what the cult is going on in College Station?! Hard pass.