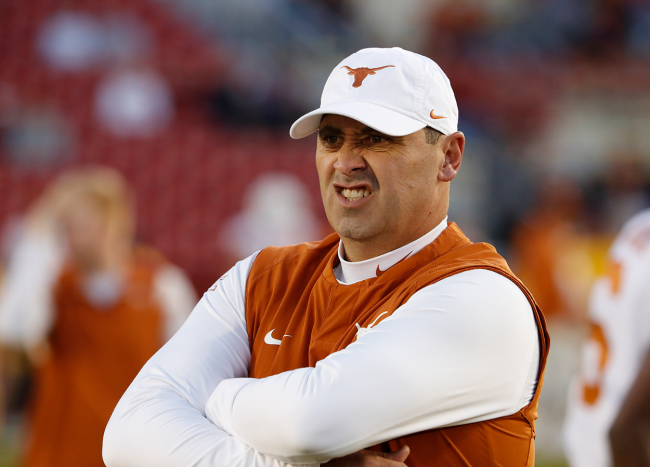 Justice Finkley has been on campus at the University of Texas for less than six months but he is a casting a very, very wide net in the dating pool. He shot his shot at every woman in the Austin area via TikTok.

Finkley, a four-star recruit from Alabama in the Class of 2022, enrolled early at Texas and got to campus at the end of January. The 6-foot-2, 255-pound linebacker was able to participate in spring football practice and is back on campus this summer ahead of fall camp.

Late last month, the Longhorns started preparing their digital and visual assets for the upcoming season and held the annual picture day. All of the players put on the full uniform, take pictures and film promotional assets for the school.

It was the first time that Finkley had put on the official burnt orange jersey as an official member of the Texas football team and he took advantage of the opportunity. To do so, he took a pretty cringeworthy TikTok to let all of the ladies know that he would be the best ride of their life. Literally. That’s what he said.

Finkley joined in on a viral trend and filmed a very soft video that is making its rounds across the college football world and getting roasted.

“You never messed with a D1 athlete have you?” the on-video text reads before switching over to say “It’s the ride of your life” with the heart hand emoji. As for the caption, Finkley shot his shot — “ATX Baddies wya😌” it says.

If Finkley’s video worked, then good for him. However, posting Charmin soft TikTok videos have not worked out well in the past. Just ask Florida State or TCU. Tough look for Finkley. Maybe Texas isn’t back…