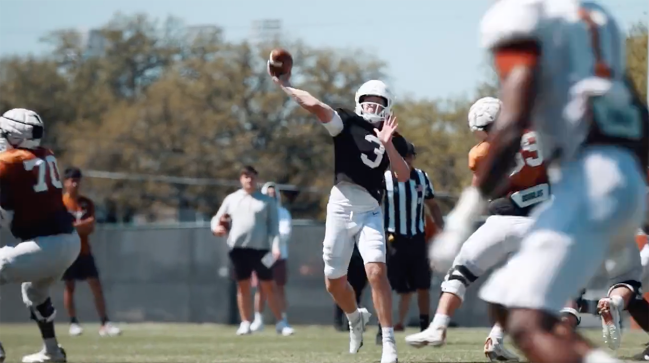 There is a lot of buzz surrounding the University of Texas football program in 2022. Three years after Sam Ehlinger declared that the Longhorns “were back,” they might actually be back this year.

Not only is head coach Steve Sarkisian in his second year with the program, but the young players have had time to develop and new players are making an immediate impact. Among those new players is quarterback Quinn Ewers.

Ewers, the No. 1 quarterback in the Class of 2021, transferred into the program during the offseason and comes with a lot of buzz. His mullet is glorious, he has a new tattoo that makes it very clear where his allegiance lies, his street cred is through the roof and he can absolutely sling it.

Ewers put his arm on display at spring practice over the weekend, but it was his receiver who stole the show. Casey Crain, a redshirt sophomore, made an absolutely ridiculous one-handed catch.

After Ewers put a dime on the money to where only his receiver could go get it, Crain made an unbelievably athletic play to haul it in.

Obviously, Ewers’ throw was overshadowed because Crain’s catch is truly incredible. But Ewers put that ball exactly where it needed to be.

Perhaps the throw could have been more refined, but that will come with time. You can’t keep arm strength.

Meanwhile, Crain is tearing it up in spring practice. He is going to be a big part of Texas’ offense this fall.

Are the Longhorns… dare I say… back?