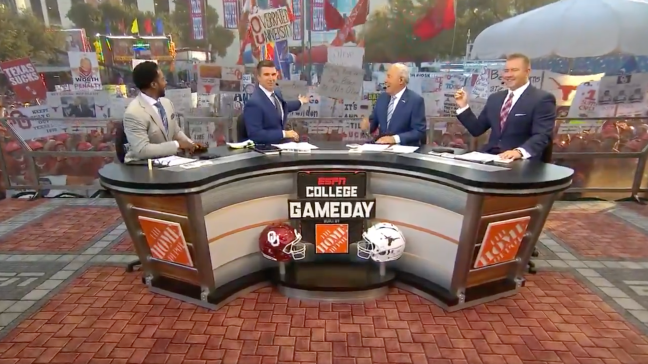 Texas and Oklahoma hate each other. I mean absolutely HATE each other. But they can agree on one thing—

The Southeastern Conference is the most dominant conference in college football.

As the Sooners and Longhorns geared up to face one another in the Red River Showdown on Saturday, College Gameday was in attendance at the State Fair of Texas in Dallas. Both teams have high hopes to finish this season strong and it would start with a win in the 121-year-old rivalry.

As both fan bases gathered outside of the Cotton Bowl, the tension was high. They were loud and rowdy early, and the sea of burnt orange and crimson was DEEP.

Despite the hostility amongst the two sides, they decided to put their differences aside for a moment.

Texas and Oklahoma are both slated to join the SEC within the next five years, and potentially as soon as next year. The announcement came back in July, so this is the first time that the two schools are facing one another with the conference realignment imminent.

To celebrate, the Longhorn and Sooner faithful joined together in a full-voiced “S-E-C!” chant at the beginning of the show.

If you thought SEC fans were unbearable before, just wait until UT and OU fans are included. It’s going to be a loud, aggressive and obnoxious, but us SECers are not going to apologize to anybody.