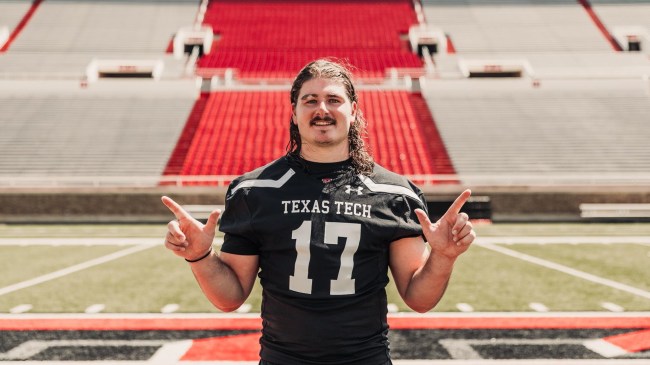 Texas Tech pulled off a 24-23 second half comeback victory over Baylor on Saturday evening and it wouldn’t have happened without a bone-rattling, earth-shaking hit from Red Raiders linebacker Colin Schooler. With just under two minutes remaining in the third quarter, Bears quarterback Charlie Brewer kept the read option around the edge on 3rd-and-goal from the 4-yard-line. He scrambles to the goal line and looks like he is about to score, but Schooler has other plans. The 6-foot-1, 230-pound California native transferred south for his senior season in the spring and immediately earned the starting job. It’s not hard to see why.

On this play, he’s lined up as Texas Tech’s outside linebacker on the left side, from Baylor’s perspective. He reads the ball and fades back toward the long side of the field. The Bears tight end gets in his way at the goal line and Schooler throws him aside before absolutely leveling Brewer. It was a textbook tackle and the pop could have been heard from outer space.

Don't try and run when @SchoolerColin is around 😳

He delivers a HUGE hit to help @TexasTechFB hold Baylor to a field goal pic.twitter.com/Sc6A4U6K93

Schooler’s tackle ended up deciding the game, because it kept Baylor out of the end zone and forced it to kick a field goal. The 23-12 lead would not hold and Texas Tech scored 12 unanswered points to win the game. While the loss stings for head coach Dave Aranda and his team, it’s easy to imagine that his quarterback will be hurting in more ways than one when he wakes up in the morning. Seriously though, my goodness. What a big time lick in a big time spot.