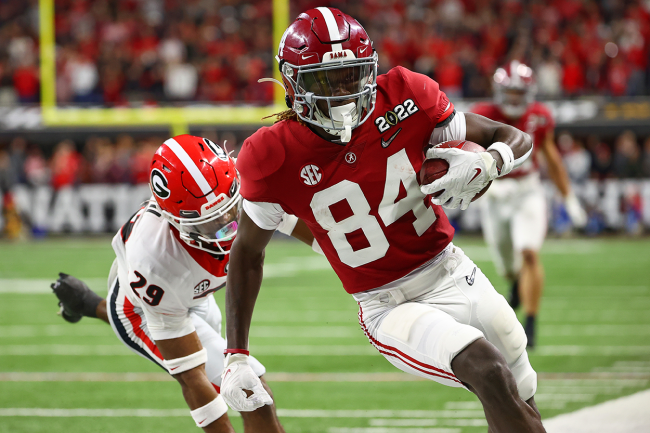 When former Alabama wide receiver Agiye Hall entered the transfer portal earlier this spring, he was one of the nation’s top-rated prospects. As such, he could have gone almost anywhere in the country.

In the end, Hall ended up transferring to Texas. His decision stemmed from a variety of factors.

First and foremost, Hall decided to transfer after he was removed from Alabama’s roster after violating team rules.

“He is suspended from the team for violations of some team rules, whether they’re academic or whatever. It doesn’t really matter,” Saban said in regard to his decision to remove Hall. “Everybody has a responsibility and obligation to respect the principles and values and do what they need to do. They’re all there to help them be more successful, so to respect those and do those are always really helpful.”

Hall entered the portal shortly thereafter after initially signing with the Crimson Tide as a four-star receiver in the Class of 2021. Despite multiple offers from Power Five programs, he landed at Texas to reunite with Steve Sarkisian, who was the offensive coordinator in Tuscaloosa while he was being recruited in high school.

“Really, I loved Bama’s playbook,” Hall said to Horns247. “And it’s Sark’s playbook. So, I gotta stick with my boy Sark. What I was doing at Bama that wasn’t seen is going to be seen this year.”

In addition, the culture and fanbase in Austin drew Agiye Hall to Texas. He did not like the fans at Alabama.

“One thing that really stood out is the culture. Bama fans — they’re not really loving, if I could say — even when you leave,” Hall told Horns247. “Texas fans are like a family. They love you unconditionally. They want the best for you and want to make sure you’re striving to be the best person you are, whether it’s people in the stands, players or coaches – they’re all connected, which is a good thing.”

Hall spent most of his freshman year deep on the depth chart, but was expected to start for Saban and Bill O’Brien’s offense in 2022. Now he will be catching passes from Quinn Ewers or Hudson Card.