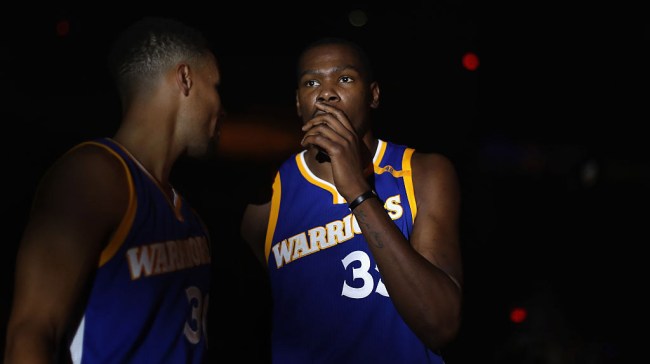 Kevin Durant has had a fairly eventful offseason after winning his first NBA championship back in June. Not only has the Warriors superstar guard gone out of his way bash Stephen Curry’s sponsor Under Armour, he was also caught having secret social media accounts t orip his former team, the Oklahoma City Thunder.

According to The Vertical’s Chris Mannix, the Warriors are hoping that the drama will eventually subside during training camp but several players and executives on the team are “perplexed” by Durant’s odd behavior.

The Warriors will open training camp Friday and maybe then things will get back to normal. The sneaker tiff with Curry seems to have blown over, and by addressing the Thunder tweets he saves himself from having to later. But make no mistake: Many in Golden State, team officials and players alike, have taken note of Durant’s oddball offseason and are perplexed by it. They see a bright future for Durant in Oakland, league and team sources told The Vertical, and are bewildered as to why he is still addressing his past.

We’ll see if Kevin Durant was just bored all offseason without basketball to occupy his mind or he’s just an extremely thin-skinned person.