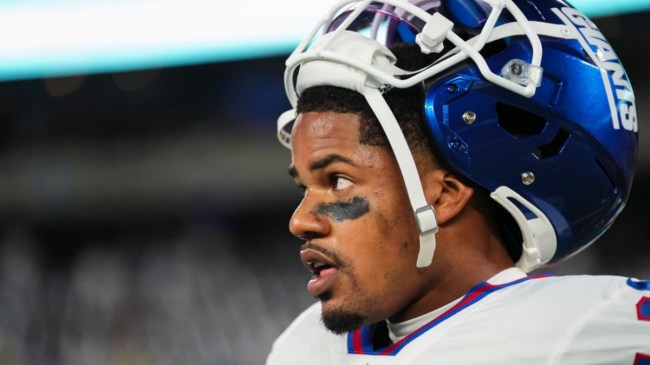 The past week was a rough one for Sterling Shepard and the New York Giants.

The Giants lost for the first time this year and it unfortunately came at home against the Dallas Cowboys. To make matters worse, Sterling Shepard tore his ACL late in the game as the Giants were attempting to make a comeback.

The ACL tear was the latest in a long line of injuries that have prevented Shepard from truly reaching his potential with the Giants. Shepard has been a reliable target for the Giants throughout his career when he can stay on the field. Unfortunately, he had already been unavailable for 24 games in his career before this injury.

Now he’ll miss almost an entire season because of the ACL.

As if that wasn’t bad enough for Shepard, the NFL has now decided to fine him for leaving the bench and engaging in a scuffle because of a hit on Daniel Jones.

Officially the worst night ever: #Giants WR Sterling Shepard was fined $10,609 for coming off the bench after Sam Williams’ hit on Daniel Jones last week. Shepard also was flagged for unsportsmanlike conduct, and suffered a season-ending knee injury later in the game.

Shepard also picked up a flag for unsportsmanlike conduct during Monday night’s loss to the Cowboys.

The Giants will badly miss Shepard the rest of the way. The team also hasn’t had Kadarius Toney in weeks and he has already been ruled out for Week 4. Wan’Dale Robinson also won’t be available this week.

Expect to see Saquon to continue to get plenty of the ball for the Giants the rest of the way.