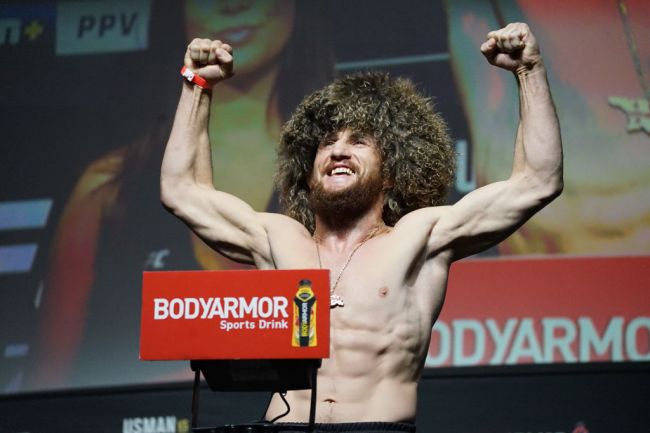 While most of the attention being paid to UFC 278 is because of the massive main event rematch between Kamaru Usman and Leon Edwards, there is also a major Bantamweight bout on tonight’s main card.

MMA legend and former UFC Featherweight champion Jose Aldo will be taking on Merab Dvalishvili in a fight that could have major title implications. Jose Aldo is currently ranked 3rd in the division while Dvalihvili is ranked 6th.

Normally, this type of fight would set up the next challenger for the belt. That may not be the case tonight as one of the fighters doesn’t want to fight for the Bantamweight title.

During a press conference for UFC 278, Dvalishvili revealed that it doesn’t matter if tonight’s fight earns him a title shot as he won’t fight champion Aljamain Sterling.

Should Merab Dvalishvili get a title shot if he beats Jose Aldo tonight? It doesn't matter, because he ain't fighting Aljamain Sterling.#UFC278 | Full video: https://t.co/jqER0EWXkn pic.twitter.com/jbl2LmvHd2

Sterling and Dvalishvili have been training partners throughout Merab’s UFC career and have obviously become close during that time. It’s not a surprise that they wouldn’t be thrilled about the idea of fighting each other.

However, it will cause a bit of a problem for the UFC if Dvalishvili wins tonight.

Merab Dvalishvili and Jose Aldo are two of the few new challengers avilable for Aljamain Sterling if he gets past TJ Dillashaw in his next fight.

He already technically owns a pair of wins of top-ranked Petr Yan. He quickly submitted 4th-ranked Corey Sandhagen when they fought.

That leaves 5th-ranked Marlon Vera, whose most recent win was against Dominick Cruz, a fight he may have been losing on the scorecards before he secured the finish.

Cruz is an all-time great in the division, but giving Vera a title shot off of that win may be a tough sell.

There’s also the matter of what they would do with Dvalishvili at that point. He’s clearly one of the best fighters in his division, but you can’t keep having him knock off contenders when he doesn’t intend to fight for the belt.

Dvalishvili is currently favored to win the fight, but an upset that sets up a title fight for an MMA legend may be the best-case scenario for the UFC.