This is How You Build the Perfect MMA Fighter: A.J. McKee Sets Sights on Featherweight Title and Million Dollar Prize at Bellator 263 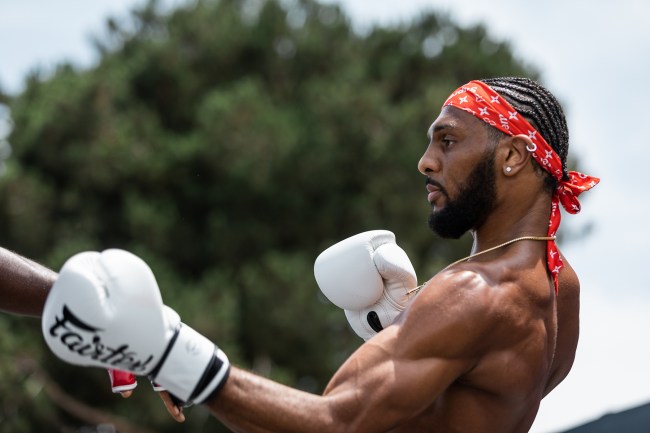 A.J. McKee was 4-0 the first time our paths crossed. It was at one of those crazy random Bellator press events. Mike Bohn from MMA Junkie probably remembers that open workout in 2016. He was there. As were Rick Lee and Dave Rispoli from the now-defunct Champions MMA site. It was a super low key affair.

Just 21 years old at the time, McKee was joined by his cousin Joey Davis and Kevin “Baby Slice” Ferguson Jr., hitting pads and grappling for a few onlookers. In between the structured parts of the workout, McKee would rattle off some of the fancier techniques in his mixed martial arts arsenal, the “spinning shit” if you will, following up with cheeky remarks about how his skills would beat even the top featherweights of the day, listing off names like Conor McGregor and Jose Aldo as potential victims of his ninja-like moves.

It was all quite effortless, honestly. So, looking back on A.J. McKee’s five-year path to Bellator 263 (July 31, 6 p.m. PST / 9 p.m. EST on Showtime) and his world title fight against champ champ Patricio “Pitbull” Freire, it’s really no surprise that he’s on the cusp of all-time greatness, not to mention a $1-million cash prize as part of the Featherweight World Grand Prix.

Born and Bred to be an MMA Champion

The son of Antonio McKee, an MMA veteran with 38 pro fights to his name, A.J. grew up in the gym, surrounded by scores of legends and hall of famers like Chuck Liddell, Tito Ortiz, and Quinton “Rampage” Jackson, who would make the trek to Lakewood, California, to train at the Body Shop, a mixed martial arts training center run by his father.

Already wrestling by age four, the younger McKee was honing his world class talent while still in elementary school, soaking up all the knowledge and information his father and the other MMA pros would offer.

Learning all the disciplines of MMA, and also learning how to combine them into one seamless art form, McKee developed a sophisticated skill set to match his rangy frame. Tall and long for the 145-pound division, A.J. combines wrestling and a creative submission game with tremendous kickboxing prowess. The results have been unmatched in Bellator, or anywhere else for that matter, leading to 17 straight wins (a promotional record), 12 of which have come via stoppage (6 knockouts, 6 submissions).

And yet, thinking back to that open workout in 2016, none of this seems like much of a surprise. In fact, it feels like this was always the plan.

Bellator From Day One

A big part of the plan to build A.J. McKee into a perfect MMA wrecking machine and mixed martial arts world champion originates with two men who will sit cageside at Bellator 263: Antonio McKee, who will be in his son’s corner at The Forum in Inglewood, CA, and Bellator president Scott Coker, who signed McKee to an exclusive contract before he even turned professional.

See, while there’s nothing odd about a 20-year-old making their professional MMA debut, it is almost unheard of for a debuting fighter to launch their career with a major player like Bellator. And, while McKee may not be the only young fighter to have been scooped up by Bellator matchmakers prior to turning pro, he has proven, by and far, to be the best.

With Bellator and Coker providing the platform, the elder McKee, wise and battle tested from his years as a pro fighter, helped guide A.J. both inside the cage and out, crafting an unconventional career path with Bellator, where he could shine on a major stage while receiving the attention many fighters lack in other promotions.

And, with Coker and Antonio making the fights and providing the game plans, A.J. has risen to meet every challenge presented before him, going undefeated over the course of six years, setting the Bellator win streak record, along with numerous records in the featherweight division, while collecting the 2020 Submission of the Year.

The McKee-otine is a work of art 🎨@RobinBlackMMA takes a look at the epic @AJMcKee101 submission ahead of #Bellator263.

For all his accomplishments, McKee’s career accolades still fall far short of his Bellator 263 adversary’s resume, although that’s really just a matter of circumstance and timing.

With Freire dominating the Bellator featherweight division for the last five years, there is a common sentiment that Bellator 263 and the Featherweight World Grand Prix Final very well might be McKee’s hometown coronation.

Sure, many have attempted to dethrone “Pitbull,” who is also Bellator’s reigning lightweight champion, although no one has come close of late. Bellator has presented and promoted a number of viable contenders to challenge for Freire’s 145-pound title, but the aura, buzz, and hype behind McKee all feel different because, well, it is different.

While McKee may trail “Pitbull,” who has won seven straight fights, in the experience department, he owns measurables like height and reach, both of which play into his style, creating a sort of natural physical advantage.

And then there is the fight IQ …

There’s no doubt that Freire has an incredible fight IQ. He’s fought in twelve world title fights, six of which went the full five rounds, and has seen every position imaginable in mixed martial arts. But he’s also acquired quite a bit of tape during his 36 career fights, allowing McKee and his father to gameplan over the course of the last few years.

The whole thing feels like a perfect storm, with the winds blowing at the back of McKee’s sails. Then again, Patricio “Pitbull” is surging and quite possibly in the finest form of his career. It’s really quite mad.

Billed as the greatest fight in Bellator history, on paper, the Bellator 263: Pitbull vs. McKee main event has potential to be the best featherweight fight of 2021, to date. It features two incredible fighters at the top of their games, both of whom can finish fights in every position imaginable. But how will the fight look inside the cage? Will it deliver the action?

Stylistically, this fight is very hard to predict.

Both Pitbull and McKee, who are known for early finishes, will likely come out conservative to get a feel for timing. There is a million bucks on the line, as well as the title, so neither fighter will walk directly into harm’s way, which makes the technical analysis a bit more difficult.

McKee would be best served to use his length, speed, and accuracy to bust Pitbull up on the outside. Then again, Freire has incredible distance management, and is known to connect in the pocket and exit the danger zone without taking damage. Pitbull’s never been properly finished in 36 fights (he suffered a leg injury, resulting in a 2016 TKO loss to Benson Henderson), so it’s tough to imagine McKee knocking him out cold or sinking in an early choke.

If there’s a finish, it’ll likely come in the transitions, where McKee may be able to surprise and stun Pitbull before dragging the fight to the ground, but there’s also a different gameplan, where A.J. jabs and kicks his way to a decision. On both sides, the paths to victory aren’t entirely clear, but the stakes and variables should be enough to convince any self-respecting MMA fan to tune in.

Chances are, this will be one of the very best fights in Bellator history. The big question now is, will it be an historic night for A.J. McKee and Bellator MMA?