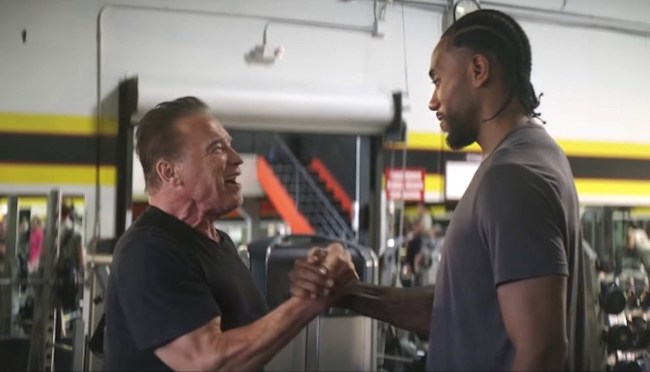 Okay, alright, ENOUGH… what planet am I on? Where am I? Who am I? What in the actual fuck is going on?

I mean, like, I get the premise — “Kawhi is a robot”! Haha! Get it?! It’s hilarious — but I don’t necessarily understand it.

Like, in all seriousness, who is this commercial for? Why does it exist? Did the marketing executives behind this think to themselves: “You know what will really sell audiences on going to see Terminator: Dark Fate in theaters? A commercial starring the King of Awkward, Kawhi Leonard!”?

Speaking of Kawhi, do you think he’s ever actually sat down and watch The Terminator or did he just have it downloaded directly onto his hard drive? I can’t even imagine what a conversation between him and Arnold would sound like — just two grown-ass men grumbling at each other.

Regardless of this acid trip of a commercial, I’m actually quite interested in Terminator: Dark Fate, as early reviews have been far more positive than I would have imagined with the latest Terminator entry being heralded as the franchise’s best since T2: Judgement Day (one of the greatest action movies of all-time, don’t @ me).

Terminator: Dark Fate — which stars Arnold Schwarzenegger, Mackenzie Davis, Natalia Reyes, Gabriel Luna, Diego Boneta, and Linda Hamilton as Sarah Connor for the first time since T2 — will be released in theaters in the United States on Friday, November 1.

As for Kawhi, his tenure with the Los Angeles Clippers began with a bang as they opened up their 2019 season with a 112-102 victory over LeBron James and the Los Angeles Lakers.