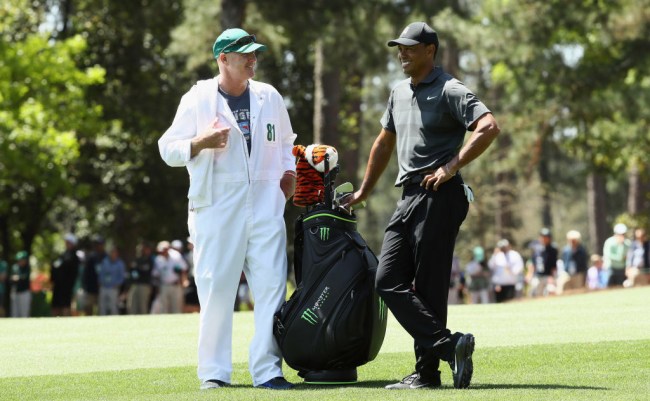 A couple of weeks ago during the final round of the WGC-Bridgestone Invitational in Akron, Ohio, a fan in the gallery was getting a little unruly with his heckling of the living legend Tiger Woods. Yes, it still happens. People, am I right?

Naturally, Woods’ caddie Joe LaCava decided to see if he could get the guy to shut his trap… nicely. Of course, THAT didn’t work, because, as I mentioned, people.

He did, however, eventually manage to get the guy tossed from the tournament, but not before he tried to pay him to leave.

Appearing on ESPN Radio’s “Golic and Wingo” show on Wednesday, Lacava shared how it all went down.

Makes sense. Easy solution. Give the spectator the money, he leaves, problem solved. But the guy still didn’t leave. Or shut up. Mind you, all this is taking place right in front of Tiger, who was waiting for a yardage.

Since that didn’t work, LaCava finally had to go to security and have the guy ejected.

So what did Woods think about the scene?

“He didn’t have a problem,” recalled LaCava. “And actually, I got a standing ovation for kicking the guy out of there.”

LaCava also discussed Woods’ awesome round at the PGA Championship and how occasionally he trolls Tiger when things aren’t going his way to lighten the mood.

“Sometimes I joke so that Tiger can hear going down certain holes,” LaCava revealed. “I’ll joke with the other caddies and say, ‘How are the fairways? Are they in good shape today?”

Awhile back, LaCava also shared what it’s like lining up a putt with Tiger Woods, his best club selection as a caddie, and his worst, setting up a practice round between Tiger and Phil, and a story about Fred Couples and a lady friend.