Tiger Woods Arrives In Augusta On Private Jet, Will Take Another Big Step Toward Playing The Masters 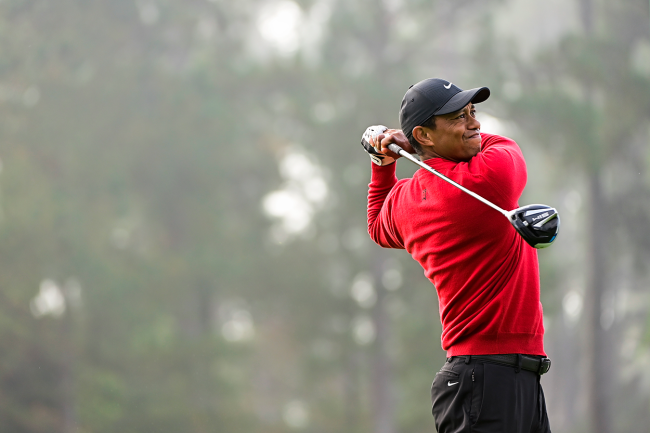 The Masters golf tournament is just over a week away and it looks like Tiger Woods is going to do everything in his power to try and give it a go. Not long after a video surfaced of The Big Cat playing golf without a cart, multiple reports have said that he and his team are traveling to Augusta, Georgia this week.

For all we know, Woods could want a $1.50 pimento cheese sandwich. However, the expectation and general understanding is that he wants to exhaust every last opportunity to try and play in next week’s tournament.

That means, by assumption, Woods will be on the grounds at Augusta National this week and will see if his body might allow him to play. Walking (at least two days) at The Masters is not an easy task, as it is about a 3/6-mile course with quite a few elevation changes.

For Woods, who is about 13 months removed from a terrifying car accident in which he thought he might lose his leg, it may be a challenge. But it seems like he is going to try.

On Tuesday morning, a private jet was spotted flying out of Jupiter, Florida — where Woods resides. It is believed to be his jet.

After heading directly north from Florida to Georgia, the jet landed at Augusta Regional Airport.

Aircraft N517TW believed to be owned by Tiger Woods
Took off from Witham Field, 20 miles from his Jupiter home.
Has landed on rwy 17, Augusta Regional Airport
Flight path nearly directly over the top of Augusta National GC pic.twitter.com/sXDUQRoQv3

This is not direct confirmation that it is Tiger Woods or anyone in his camp. It could be another person who just so happens to be flying from Jupiter to Augusta.

However, the pieces of the puzzle seem to make a pretty clear picture — Woods arrived in Augusta on Tuesday.

Woods is in Augusta, Georgia with the intent to make a test run at the golf club this week. He will reportedly start by scouting the course this afternoon.

🚨TW plans to scout Augusta National Golf Club today to further evaluate his body and game on tournament grounds. A big step in his efforts towards making a decision on playing #TheMasters.

Woods is currently listed on The Masters website. Reports have indicated that he wants to play. He has been walking golf courses as recently as this past weekend.

If Woods can play, it seems like he is going to do so. He will have until Friday to withdrawal, so there is time for him to figure it out.

For all we know, Woods could see the course this afternoon and call it. He could play nine holes at Augusta National later this week and call it. His body might not be ready.

But, Woods has played through serious injury in the past. Could this be the next remarkable feat in his storied career?