How Much Would You Pay To Drink Beers With Tiger Woods And His Caddie While Watching His 2019 Masters Win? 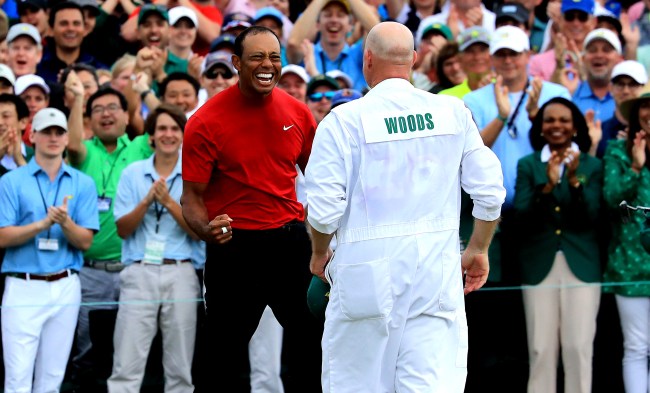 Because Tiger Woods sitting around drinking beers with his caddie Joe LaCava while they watched his improbable, incredible 2019 victory at the Masters is a thing that actually happened recently.

This week, as he gets ready to play in the Hero World Challenge at Albany Golf Club in the Bahamas, Woods revealed to Martin Dempster of The Scotsman that he re-watched the final round of his first major win since 2008.

“I sat down and watched it with Joe [LaCava],” Woods admitted. “He came down to do a TV spot then he and I just sat there, had a few beers and watched it. We spoke about the conversations that we had over each shot; some of our friends and family who were there were like ‘Oh my God, you guys really talked about that?’”

“But that’s what we were talking about, that’s what was going on,” Tiger continued. “We were running through all the scenarios, Joe looking at the boards, I am looking at the boards. We were trying to figure out what was going on; who birdied what, who was  making a move. We were having those discussions in the fairway about what we needed to do while still staying focussed about executing. So it was a lot of fun seeing it back and sharing it with Joe because he has been through all the tough times with me as well as the good times.”

So how different was it for Tiger to watch his 15th major win versus actually being on the course as it happened?

“You can’t see the runs of other players ahead; whether  DJ, Bubba, Rickie, Xander,” replied Woods. “The only one we could see was Brooks [his playing partner in the final round]. We just had to look at boards whenever we possibly could. You hear roars and try to figure how many holes ahead it is, who would be on that hole. All these scenarios are running through our heads as we try to handle the situation in real time. Now, it’s a lot easier on TV. You see it in front of you. It’s like calling a game on a sideline versus up in a booth. It’s much easier in that booth.”

Tiger Woods in the booth for a golf tournament? If that doesn’t happen when he eventually hangs up his spikes then we have failed as a soceity.