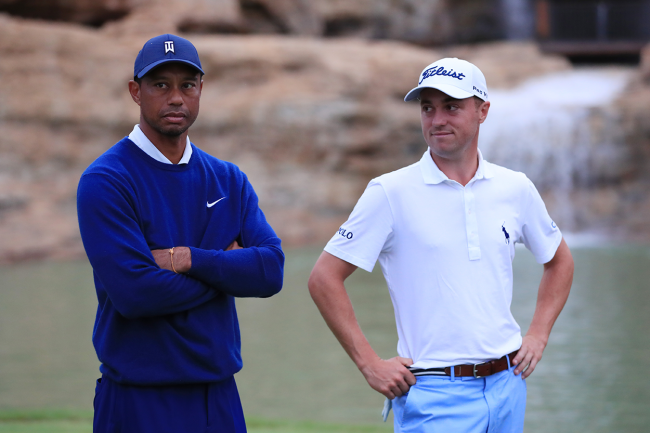 Just when people start to count Tiger Woods out, the greatest golfer of all-time always seems to silence those doubters. That appears to be the goal once again.

According to Woods’ good friend, confidante and fellow golf star Justin Thomas, he is not done yet. The 28-year-old claims that the golf legend will try for a comeback to the PGA Tour.

During an appearance on No Laying Up’s NLU Podcast, Thomas spoke about his recent interactions with Woods. Now nine months removed from his horrifying, near-death car crash, Thomas said that he has had nothing but good vibes from Woods.

Per Thomas, who has been visiting with Woods two or three times a week in Florida recently, the 45-year-old is going to attempt a return to the professional level. Did we really expect anything less?

“I know that he’s going to try,” said Thomas. “I know how determined he is and I know he’s going to want to at least try to give something again.”

This is the first time that we are hearing a definitive statement surrounding Woods and his hopes for a return to the links. After the accident, reports began to circulate about the severity of his injuries, and many people wondered whether he would be able to walk properly again, let alone play golf.

To put Woods’ injuries in perspective, they were worse than the injury suffered by NFL quarterback Alex Smith. A potential timeline after he was released from the hospital was lengthy and strenuous.

Woods first provided an update back in May and it was a long road to recovery.

However, Woods was recently spotted walking without a limp last month. And, according to Thomas, he is “doing well” in his rehab.

While it is currently unclear whether Woods has begun to swing a club again, Thomas would not provide an answer. Either way, he said that he believes that Woods will need to get back to shooting in the 60s again.

Thomas is not putting it past Woods to get there, and based on history, that’s a smart call. Now we wait.