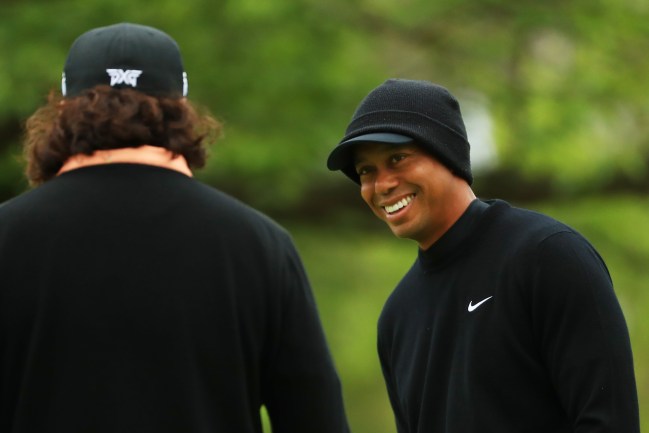 Before the Masters last month The Action Network’s Darren Rovell reported that some insane dude bet $85,000 on 14-1 odds that Tiger Woods was going to win the tournament.

JUST IN: A William Hill sportsbook in Nevada just took an $85,000 wager on Tiger to win the Masters. At 14-1, pays out $1.19 million if he puts on another green jacket on Sunday.

Tiger went on to win the Masters and made James Adducci a lot of money in the process.

James Adducci with his winning tickets. “I feel fortunate that @WilliamHillUS allowed me to place the wager” pic.twitter.com/VqJqh3BhQX

Today, Tiger was asked what he thought about Adducci’s Masters’ bet while he was getting in some practice drives at Pebble Beach ahead of the U.S. Open and he had a great answer.

This is the greatest video I’ve ever seen. (Tiger says a naughty word too so heads up.) 🐅👀 (credit to Adam Weinraub on Insta.) pic.twitter.com/tNcVIwEHpP

Tiger did go on to call Adducci a “dumbass” for placing 100-1 bet on him to win the grand slam.

He placed a $100,000 bet at 100-1 odds this afternoon on Tiger to win the Grand Slam this year at William Hill's SLS sportsbook.

The bet would win $10 million.

“He’s a dumbass for the grand slam part though” ☠️ https://t.co/VPZH9lUZ4T

Tiger continues to be the GOAT.