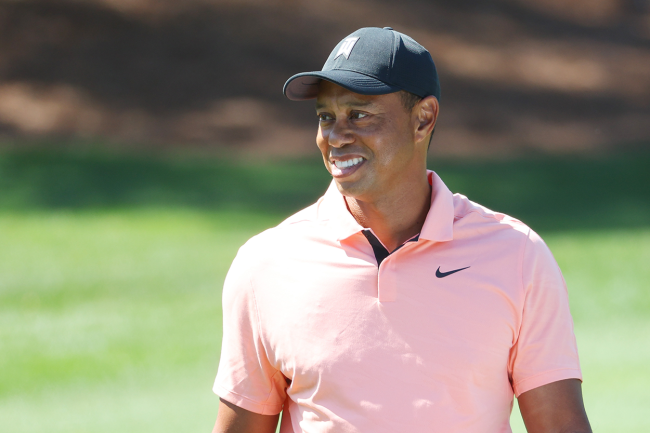 The closer that it gets to The Masters, the more and more it looks like Tiger Woods is going to give it a go. He was seen preparing for the most famous tournament in golf at Augusta National on Sunday afternoon and his choice of shoes raised eyebrows.

Historically, Woods has worn all Nike gear. On Sunday, he was wearing Footjoy shoes.

After rumors started to swirl in early March, Woods arrived in Georgia on Tuesday of last week. He and his son, Charlie, played a practice round together later that afternoon, which was the first step toward playing in The Masters, and reports from Augusta sounded promising.

Friday marked another huge decision. Former champions and current competitors had until Friday afternoon to withdrawal from the tournament.

Woods did not. Obviously, being who he is and because it would be due to an injury, he could still bow out in the coming days, but for him to stay in the field through Friday was very telling that he is going to try.

As a result, Woods’ odds to win The Masters saw a MASSIVE jump. Meanwhile, former PGA Tour players gave their reasoning for why they think that Woods will play.

And then, on Sunday morning, Woods gave an official timeline for his decision on whether he will play in The Masters.

Although he said that it will be a “game-time decision,” his update sounded very positive. Not long thereafter, he was seen on the grounds at Augusta National.

Shortly after Woods arrived at the club, he was seen making his way out to the range.

He was putting in work.

Of the many photos that showed Woods practicing at Augusta, there was one subtle detail that stood out— his shoes.

Again, Woods has long had a deal with Nike. His Tiger Woods brand falls under the Nike umbrella. He is a Nike guy.

But not on Sunday. At least, not on his feet.

Instead of Nike shoes, Woods was wearing Footjoy shoes.

Still efforting for details but biggest shocker so far is Tiger showing up in what looks to be FootJoy Premiers today. Did NOT see that coming. pic.twitter.com/e8zzKYpbNx

Tiger's got FootJoy's on. pic.twitter.com/ycdlNFZhHV

There is no clear answer as to why Woods would choose to wear Footjoys. However, the general assumption (which is exactly that, an assumption) is that it has something to do with his injury.

Maybe Footjoy shoes simply feel better on his feet? Maybe they allow him more comfort or less resistance on his legs, which he almost lost in the accident?

Whatever the reason might be, Woods is wearing Footjoy— not Nike. It’s something to keep an eye on.

As for what is next for Woods, there is no way of knowing. But with that being said, he is scheduled to speak to the media on Tuesday, which will surely give all of the insight that he and his camp and the tournament are willing to share.

NEW: Tiger Woods will speak with the media at #TheMasters at 11 a.m. on Tuesday, according to an announcement by Augusta National officials on Sunday afternoon.

Whether he ends up stepping up to the first tee on Thursday or not, for Woods to even be considering playing in The Masters less than a year and a half after his accident is remarkable.

Tiger Woods was inside this car 404 days ago suffering a number of serious injuries and feared he could lose his right leg.

Twenty-five years ago he won his first green jacket by 12.

Today, he’s a game-time decision to make his return to golf at next week's Masters.