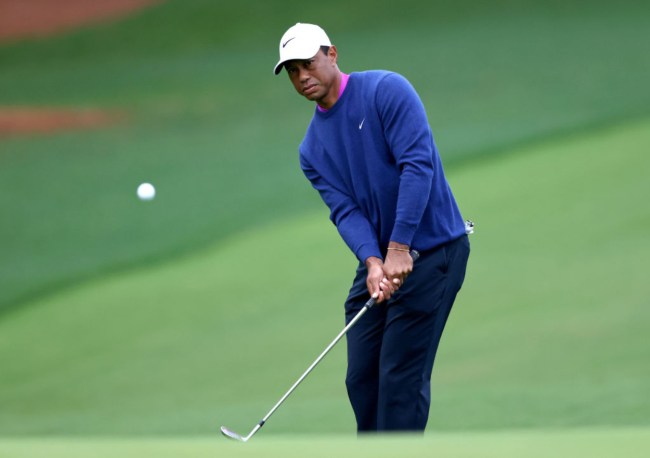 At this point in time, it would be surprising not to see Tiger Woods tee it up in next week’s Masters. That statement wouldn’t have had any bearing to it whatsoever a week ago, but given recent developments, it’s clear that Woods is going to do everything in his power to tee it up at Augusta National.

Woods is still listed as a player in next week’s field at the time of this writing, which is a huge sign in and of itself, but other happenings have certainly added to the speculation.

Over the weekend it was reported that Woods had been playing, and walking, his home course Medalist this past week. A video then emerged on social media of Woods and his caddie Joe LaCava at Medalist. There was no cart to be seen in the video either, which gives some truth to the report of Woods walking the course.

For former PGA Tour player Colt Knost, the fact that LaCava was spotted with Woods at Medalist is a tell-all sign that he’s playing in the 2022 Masters.

“He’s gonna tee it up, I think. I know Joe and Tiger are close, but I don’t see Joe flying down to Florida just to carry his bag and hang out,” Knost explained on ‘The Drop Zone‘ podcast. “If he knew he wasn’t going to play, he would have already told us.”

It’s a simple explanation, but one that certainly makes sense.

Fast forward to Monday, and it was reported that Woods would be traveling to Augusta National to give his body, specifically his surgically repaired leg, a test run on the hard walk that is Augusta National. Woods arrived in Augusta on Tuesday with his son Charlie and is reportedly teeing it up with Justin Thomas in a practice round.

Woods isn’t just jumping on his private jet and flying to Augusta National the week before the Masters to play the course just because it’s in great shape. No, it’s clear that his mind is set on making his first competitive start in 17 months at Augusta National.

The five-time Masters winner could absolutely still announce that he won’t be playing next week. That’s not the story, the story is Woods doing everything in his power to make his competitive return at arguably the most iconic course and tournament in the game of golf.