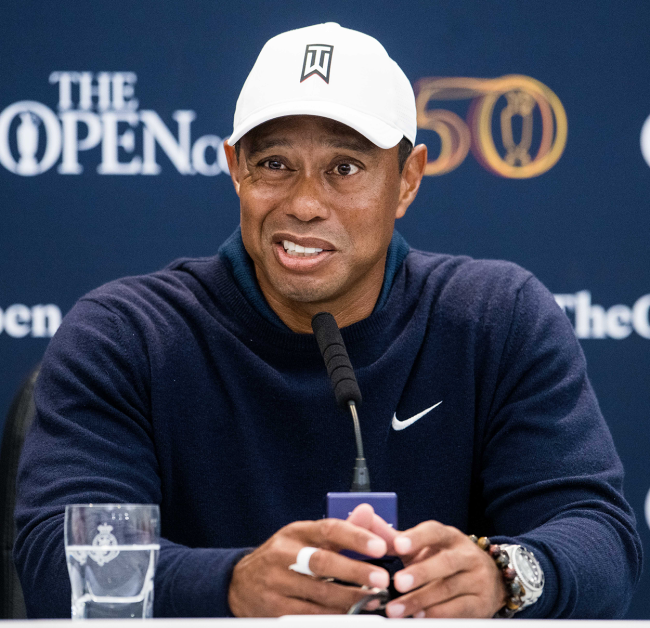 Tiger Woods is eyeing his fourth Open Championship this weekend. It is a tall task for the legendary golfer, who continues to battle back from a car accident that nearly took his leg, but he seems optimistic.

Of the three Claret Jugs that Woods has hoisted during his career, two of them came at the Old Course at Saint Andrews in Scotland. That is where this weekend’s tournament will be held.

Woods has said before that he would not be competing if he does not think that he has a chance to win. To prepare for the 150th Open Championship, he walked 36 holes in less than 19 hours over the weekend and played his first 18-hole practice round before a Major since his return.

The 46-year-old played only nine holes ahead of The Masters and the PGA Championship to preserve his energy. He and Justin Thomas went out for a chipping and putting round on Saturday and followed it with a full dress rehearsal on Sunday. Details from the round were ‘encouraging’ and Woods was in great spirits.

However, there have been a lot of murmurs about Woods’ future after this weekend.

Back in January, one golf analyst predicted that he would retire after The Open, just like some of the golf icons before him. Earlier this week, another Sky Sports Golf analyst offered the same prediction, telling everybody to prepare for Woods’ retirement.

On Tuesday morning, Tiger Woods addressed the retirement rumors at The Open Championship.

He shot them down with a lot of “nos.” Woods made it very clear that he has no intentions of retiring any time soon.

As he has said in the past, Woods said that he will not be able to continue playing a full schedule, which he admits is frustrating. But he is not hanging up his clubs.

Tiger Woods tells Sky Sports he has no plans to retire at the moment but admits this may be his last chance to win an Open at St Andrews 🏴󠁧󠁢󠁳󠁣󠁴󠁿 pic.twitter.com/vOsvuKIsBi