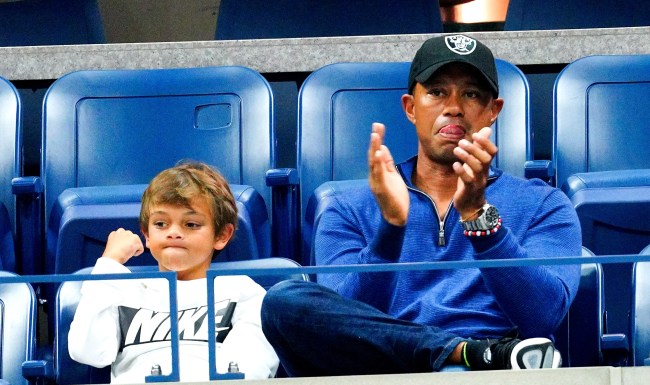 If young players on PGA Tour are secretly glad that Tiger Woods isn’t as dominant as he once was now that he’s 44-years-old, they just got some bad news over the weekend.

With his famous dad on the bag, Charlie Woods competed in a US Kids Golf event at Hammock Creek Golf Club in Palm City, Florida and not only did he shoot a 3-under 33 with three birdies, he beat the rest of the field by a dominating five strokes.

Tiger Woods' 11-year old son Charlie won a US Kids event by 5-strokes and Tiger caddied for him.

Last month Tiger talked about Charlie’s game with GolfTV and sounded more than a little envious of his son.

“He’s starting to get into it. He’s starting to understand how to play. He’s asking me the right questions,” said Woods. “I’ve kept it competitive with his par. It’s just an absolute blast to go out there and be with him and it reminds me so much of me and my dad growing up.

“I wish I had his move,” Tiger added. “I analyze his swing all the time. I wish I could rotate like that and turn my head like that and do some of those positions, but… those days are long gone and I’ve got relive ’em through him.”

"I wish I had his move."@TigerWoods talks about coaching his son Charlie and what they’re working on. Watch the full video: https://t.co/fMDSsqfkdZ pic.twitter.com/igqkP2v4Tn

So, Charlie turns pro, what at age 15? 16? That gives the top PGA pros just four or five more years without having to deal with a Woods breathing down their necks on a regular basis.

He keeps this up and in the not so distant future Charlie will have a green jacket of his own.

Masters Champions Dinner quarantine style. Nothing better than being with family.