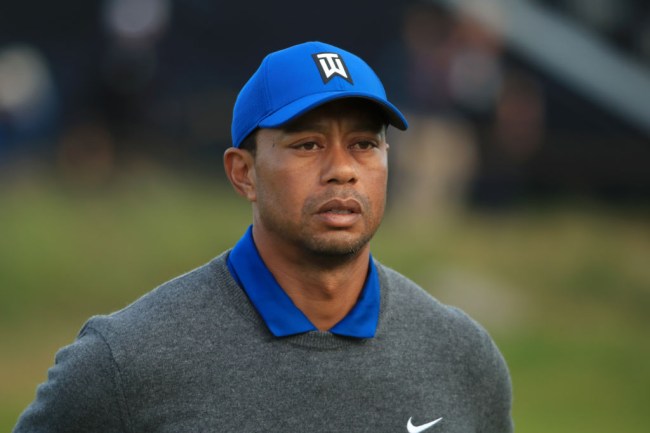 It’s easy to forget, especially since we saw him put on a green jacket this year, that less than five years ago it wasn’t even clear whether or not he’d tee it up again. It wasn’t that long ago he was withdrawing in the middle of tournaments, unable to play in majors and undergoing back surgeries and spinal fusions.

Woods winning his first major since 2008 this year has overshadowed just how epic his unlikely comeback story really was and continues to be, it’s almost an afterthought now. That’s understandable too because we tend to focus on the positive and forget about the negative, but we can’t forget Woods is 43-years-old and has gone through just a few tough moments over the past few years.

That tired, uninterested and possibly even a little banged up Tiger was what we saw on Thursday at Royal Portrush. He looked beat and like a player that may need to throw the clubs in the garage and not look at them again until 2020. If Tiger did decide to do that, there’s not a single human that would be disappointed in that move because this year has already been an all-time year for Woods and his fans with the win at Augusta National.

Outside of Tiger pulling his opening teeshot out of bounds like Rory McIlroy did earlier in the day, the opening swing couldn’t have been too much worse for Woods. Just before his ball found the rough, Woods grimaced and it didn’t look like a grimace of disappointment, it looked like a grimace as a result of pain.

Woods ended up making par at the first, but the opening tee shot was a great preview of what we would see the rest of the day. He hit just over half of his fairways and greens in regulation on Thursday and the putter did him no favors at all. He made just one birdie, not coming until the 15th hole.

If it wasn’t for a few impressive up-and-downs early on in the round, the 78 he signed for could’ve turned into a number in the 80’s. His 78 on Thursday is the highest first-round score he’s posted over the span of his 20 starts in the championship.

Woods told the media earlier on in the week that his game wasn’t where he wanted it to be, but nobody would’ve predicted Tiger to be beating a total of just seven players in the field as he sits at T-144 heading into Friday.

Let’s also not forget that Woods entered the week with just 10 tournament rounds to his name since winning the Masters back in April. He missed the cut at the PGA Championship and was a non-factor at the U.S. Open.

The scorecard speaks for itself, but what really stands out is just how uninterested Woods looked. It didn’t help that he was hitting the ball poorly, but instead of seeing a fiery, grind it out Tiger we saw a man that looked like he wanted to be anywhere but on a golf course. Paul Azinger mentioned on the broadcast that when Tiger doesn’t get mad or amped up, then that’s the real indicator of something not being right.

Following the round, Woods did admit to some soreness in his back and said “I’m just not moving as well as I’d like…Just the way it is. Father Time and some of the procedures I’ve had. Just the way it’s going to be.”

He looked like a man that needs to hang the clubs up for the rest of the year, and those statements justify that idea even further. It’s not the worst idea either. Sure, that means missing out on the FedEx Cup Playoffs and much lower ratings from a broadcast standpoint, but resting up and getting back to one-hundred percent in preparation for the big tournaments next year makes more sense than not.

Barring him firing a low number tomorrow and making the cut, this Open will ultimately be one we forget from a Tiger viewpoint and that’s completely fine, again, because that green jacket he won earlier in the year.