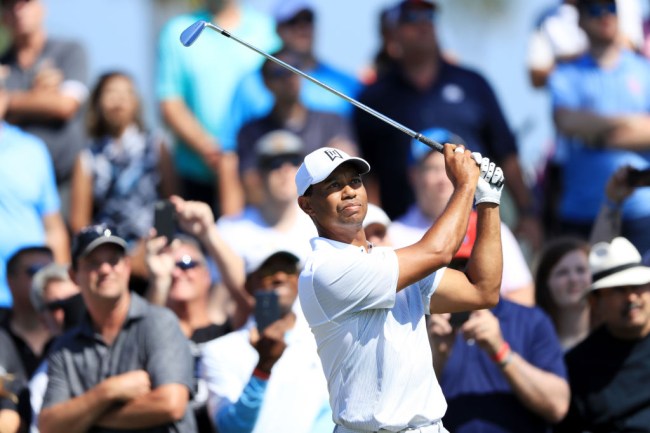 Tiger Woods is getting ready for The Players Championship this week at TPC Sawgrass in Ponte Vedra Beach, Florida. It’s the unofficial ‘5th Major’ in golf, the one trophy every player wants to capture outside of the four Major Championships.

During a Tuesday press conference, one reporter asked Tiger Woods about LeBron James and what it is that makes LeBron James so great. Tiger could’ve easily deflected and said ‘look at his numbers’ but you could instantly see that this is a topic that Tiger Woods has thought deeply about because it also pertains to how his own career has shaped up over the years. You can see a video of Tiger’s answer here from the SportsCenter Twitter account but I’ve also transcribed it below:

Tiger was asked about what makes @KingJames great.

“Being great is doing something that no one else can do but also what separates those people, the ones you mentioned like LeBron or what I’m thinking of like MJ (Michael Jordan) or Gretzky is just the duration. They do it not just for one year or not just for one game, not just for a little spell. They will do it for a number of years and accumulates highlights that we will always look at, and they are peppered in our memories.

In our sport, there have been a few guys who have had runs where they’ve lasted for well over a decade into two and that’s what separates greatness. What LeBron has done for 15 seasons now it’s just remarkable because it’s that type of longevity, and to be able to be up for that long a period of time. And to be able to adjust as well because we all know as we age we’re not going to be as athletic as we used to be and so you have to do it different ways. And to be fluid and adjust and still be that talented and that good, my hat’s off to not just LeBron but the people I just named.” (via)

It’s going to be pretty fun to watch Tiger Woods compete at The Players this week(end). He didn’t have the best showing last weekend at the Wells Fargo in North Carolina but the entire Golf world is hoping that Tiger’s sorted out some of his putting issues in the past few days and can get back on track towards the Winner’s Circle.