ESPN’s Tim Legler Caught On Hot Mic Swearing At A Woman After Connection Snafu On Stephen A. Smith’s Show 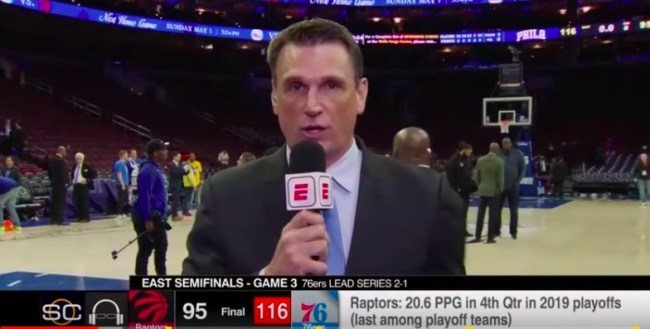 Nothing gets my engine running like a someone unknowingly breaking his public persona to reveal a darker side. Like Jesse Jackson whispering that he wants to cut Barack Obama’s nuts off for talking down to black people. Or this news anchor getting canned on the first day on the job for starting off his segment with a family-friendly “Fucking, shit!” And my personal favorite: a Texas mayor forgetting to turn his mic off when dropping a deuce at a town hall.

ESPN’s Tim Legler caught the wrath of a hot mic after joining Stephen A. Smith’s show yesterday afternoon. Legler was in the middle of applauding Bucks’ Khris Middleton when Stephen A. cut him off to tell him he couldn’t hear him. But, viewers still could, and we soon found out that Legler is quick to swear at the women in his life.

Tim Legler dropped a few f-bombs on live on-air when technical difficulties occurred during the Stephen A Smith show 😭😭😭 pic.twitter.com/F98LNyv7au

“I’m so fucking sick of this shit,” Legler said to a woman in the room, adding another f-bomb about the headset. The woman diverted all blame to the 15-year-old phone he was using.

@stephenasmith so we not gonna talk about Tim Legler cursing out his assistant on live radio….or was it his wife?….wow 😂….people change when the camera goes out.

Tim legler was pissed about that old ass phone 😂😂😂😂

Tim has yet to comment on the important issue.