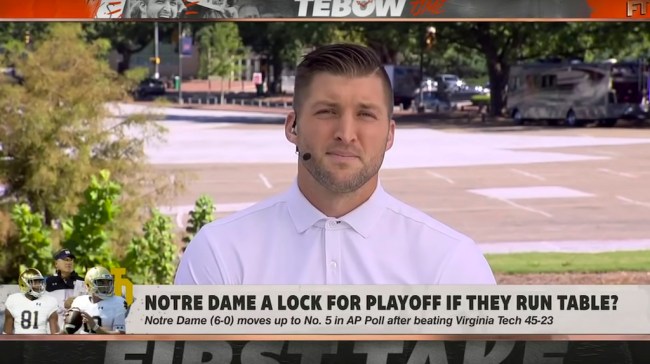 I don’t hate Tim Tebow, you hate Tim Tebow. I swear I don’t hate that stupid little jump pass that he did against LSU while he was playing for the Florida Gators. And I promise he totally deserves ESPN completely giving him love 12 years after he led those Gators to a national championship over my Ohio State Buckeyes. So, yeah, it’s you who hates Tim Tebow, not me.

But since ESPN still keeps Tebow relevant, it’s hard not to hate him, right? I mean, dude, we get it, you were sick in college, flamed out in the pros (or just wasn’t given much of a chance), and tend to, generally, give off the vibe of being a nice guy, but who declared that Tim Tebow is the ultimate college football god? I don’t know, but it sure seems as if ESPN has something to do with it, and now he’s our problem to deal with.

That said, I have to give respect for Tebow keeping things 100 today while appearing on ESPNs First Take to talk about the College Football Playoff system. As all college football fans know, since the current, four-team format came into existence four years ago, it has been debated whether or not more teams should have a shot at the national title, with coaches, players and the media giving their best reasons why the CFB Playoff should be expanded. Well, Tim Tebow doesn’t think the system needs to be redone at all, and his reason is pretty damn logical to me — it makes every week matter during the college football season.

Here’s a snippet as to what Tim Tebow said to First Take, in case you’re too damn impatient to sit through the entire video above, per FTW.USAToday.

Now, the four-team playoff… it gives you a chance maybe, if you fall once, to still get in. But you have to hope and you have to pray and other teams have to lose. But if you open it up to six or eight, then I think you dumb down the regular season. You dumb down these big games that are happening every week, and I want to keep what is special about college football special.

…. Or else let’s just turn it into 64 teams and play March Madness again. I only watch college basketball in March, for March Madness. You don’t need to watch the regular season.”

Tim Tebow has a valid point here. Sure, the NCAA Tournament is exciting AF, with Cinderella teams upsetting heavy favorites and busting brackets during the first weekend. But, while March Madness is dramatic, a team who loses to its conference rival three times during the year can still win the whole shebang. That’s not to say it’s a flawed system, but the regular season isn’t as nerve-wracking as college football’s.

I can’t believe I’m saying this, but I agree with Tim Tebow. Some of the best rivalries in sports come in college football, with Alabama-Auburn, Texas-Oklahoma and Ohio State-Michigan among a few. Maybe I’m old fashioned, but if those teams enter that game with an equal record, the loser should be out of the College Football Playoff discussion. Hey, put up or shut up, right?

Anyway, the College Football Playoff system is more exciting than ever because, as Tebow claims, games are more exciting and critical each week. Still, it’s a topic that’s forever going to be debated because, well, that’s what people do when it comes to sports.