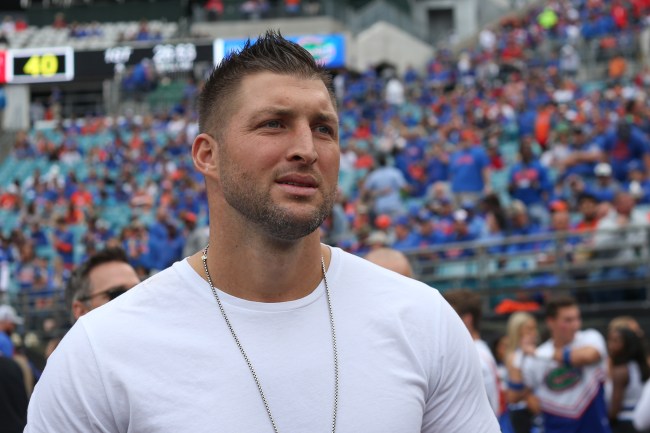 Tim Tebow officially signed with the Jacksonville Jaguars on Thursday but not many believe he’s going to make the actual roster.

On Friday’s edition of Get Up!, ESPN NFL reporter Kimberly Martin said she had talked to several people within NFL league circles and “no one” expects Tebow to make the Jags’ final 53-man roster this summer. According to Martin, those in the NFL believe Tebow’s signing was just for publicity.

“Greeny, if you ask people from the NFL, they say ‘no he won’t,” Martin said. “No one expects him to actually make the roster. They think this is more about publicity. This is more about Urban trying to do a solid for a guy that he clearly has an undeniable bond with. But nobody in the NFL thinks that Tebow is good enough to make an NFL roster…Naturally, transitioning to the tight end position, something he’s never played. So, I think he might actually just retire before this is all said and done.”

FS1’s Shannon Sharpe, who is considered one of the best tight ends in NFL history, also went on to accuse the Jaguars of giving Tebow an opportunity to play tight end just “to sell tickets.”

.@ShannonSharpe on Tim Tebow signing with the Jaguars:

"Everyone knows why Tebow got this opportunity. He's from Jacksonville and they're trying to sell tickets. It's not because he can play." pic.twitter.com/c3fj5H7IXo

Those people are probably right about Tebow signing just being about publicity. In just one day, Tebow’s jersey was the top selling jersey in the NFL.