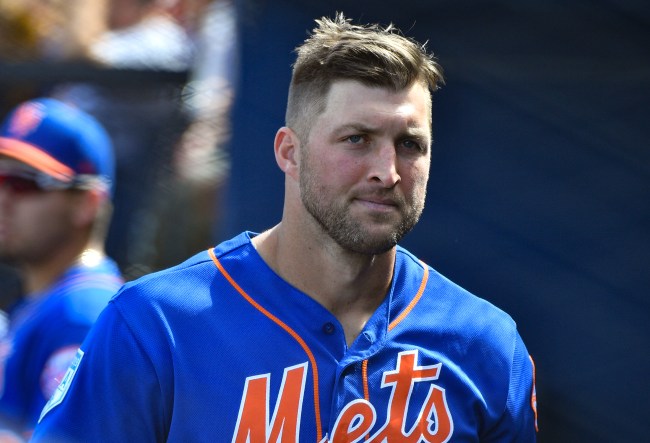 Tim Tebow was officially sent down to the Triple-A affiliate of the New York Mets today, ending his long shot bid at making the major league squad. And while Tebow is probably disappointed that he won’t be competing for a chance to play in the majors a the beginning of the season, the former Heisman Trophy winner knew that his fate was probably going to end up this way.

That’s because the Mets’ front office — specifically manager Mickey Callaway and GM Brodie Van Wagenen — were completely transparent with Tim Tebow about their intentions with the former Florida Gators quarterback, all but saying that he had little to no chance of starting on the Mets. That’s something that Tebow appreciated, which led to him taking a subtle dig at the New York Jets after he was released by the NFL team six years ago.

At the time of his Jets release, then head coach Rex Ryan didn’t offer much of a reason, just saying the team had a “great deal of respect for Tim Tebow.”

“We have a great deal of respect for Tim Tebow,” coach Rex Ryan said. “Unfortunately, things did not work out the way we all had hoped. Tim is an extremely hard worker, evident by the shape he came back in this offseason. We wish him the best moving forward.”

When asked by a reporter if this current Mets demotion to the minor leagues compares to how it all went down on the Jets back in 2013, Tim Tebow didn’t mince his words, saying that the Mets situation is “totally different than the Jets.” The main reason? He wasn’t caught off-guard by his then NFL coach and front office.

"It's totally different than the Jets here" – Tim Tebow pic.twitter.com/4x6RPaqL6P

Here’s the full quote that Tim Tebow said, per FTW.USAToday:

“It’s totally different than the Jets here. I don’t know that there’s much comparison at all. It’s very, very different circumstances. I think this is one where it’s just been open communication the whole time — knowing, understanding, learning.”

This could just be a matter of the two sports being different with how they handle the roster — since the NFL doesn’t have the luxury of a minor league system like the MLB does. But, clearly, the way the New York Mets handled things made a good impression on Tim Tebow when compared to the New York Jets in 2013.

Considering the Jets have been a debacle for a long, long time, it’s not too surprising that Tim Tebow called them out on how he was treated six years ago. Sure, the Mets haven’t been that much better, but at least they were candid with the hopeful baseball player and didn’t just do him dirty with miscommunication about where he might play.

Now just one level below the majors, it’ll be interesting to see if Tebow gets a chance to live out his dream of playing for the New York Mets at some point this season. Whether it’s to happen or not, Tebow has to like the fact that the organization will give it to him straight rather than lead him along all season long. That’s something the Jets clearly miscommunicated in 2013.