Former Jet Nick Mangold Recalls Tim Tebow Refusing To Swear In The Huddle, Even When His Job Demanded It Of Him 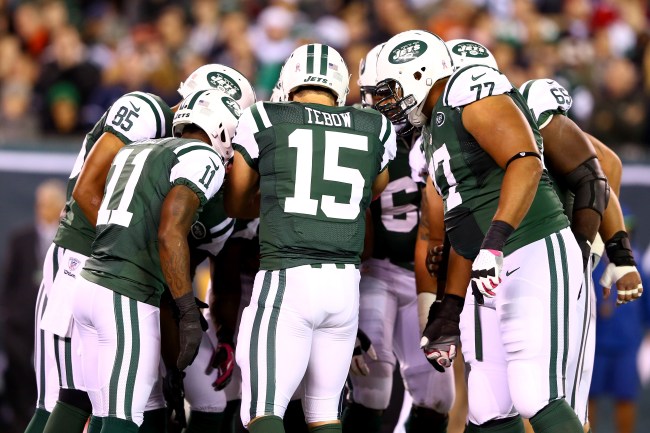 The Tim Tebow Experiment in New York spanned one year, eight passes, and 32 rush attempts before burning up in a fiery tornado of anonymous leaks to media and the perpetual need to blame someone on the franchise’s misery.

The Jets went 6-10 in 2012, two years after appearing in back-to-back AFC Championships, so it’s not hard to imagine the F word being as ingrained in Jets culture as Fireman Ed.

But Tim Tebow, a pious man, would not take the bait. Even when his literal job demanded it of him.

We spoke with legendary Jets center Nick Mangold on our Endless Hustle Podcast about Tebow Mania and the lengths he’d go to avoid engaging in Locker Room Talk.

“The machine of Tebow and the whole production around him is crazy.

This is my one Tim Tebow story. We had a play that was a ‘Y Oh Shit’ screen, where the tight end actually fakes like he fell down on a running play, hops up, runs back over, throws back to the tight end and it’s usually wide open.

And he comes in, he was the backup quarterback so he’d run one or two plays each week. He’s got the script there and everything.

And he starts reading it, and he goes through the whole formation and gets to the last play:

‘Y, Alright Screen,’ you guys know what it is.

I think we ended up getting yelled at for that because we were taking forever in the huddle.”

After Tebow struck down the rumor that he requested a hairstylist who refrains from using curse words at a Beverly Hills salon, the only Tim Tebow ‘F bomb’ on record was before a game during Florida’s 2008 title run. The Gators reportedly won by 40.

That won’t prevent him from going to Hell.

Listen to the whole

The Competition Hangover of retirement (11:38)

The toolset required to be an elite lineman in the NFL (16:00)