Tim Tebow Gets Emotional Talking About His Buddy, The Victim, Urban Meyer, Also Feels Bad For His Wife 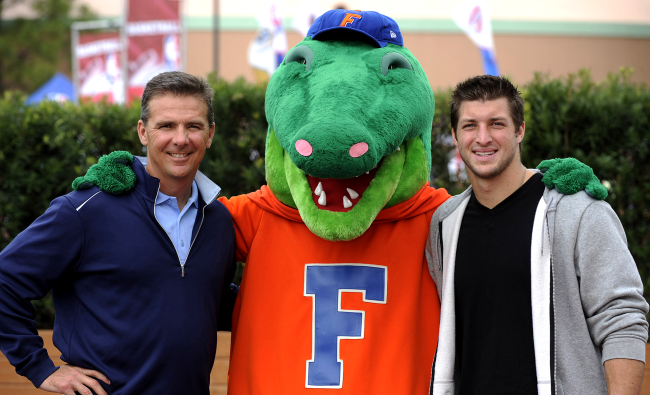 On Friday, Tebow appeared on First Take about the controversy surrounding Urban Meyer and said he has spoken to his former college coach and given hims advice with regard to the scandal that has unfolded this week.

Amazingly, or maybe not so amazingly, considering the source, Tebow somehow tried to spin the story into making Meyer the victim.

Related: Mom Of Woman Who Danced On Urban Meyer Speaks Out About The Video

“Well, I think first of all this is a very disappointing, frustrating, and honestly heartbreaking situation,” said Tebow. “When I first saw and heard about what happened, my heart was hurting for Miss Shelley, coach’s wife, someone who I love very much, and his daughters, who I’m very close with, who I’ve talked to both of them this week, and also had the chance of talking with coach. It’s a very difficult week.”

Tim Tebow looks like a hostage having to talk about Urban Meyer on First Take.

“My advice to him was to apologize, to admit it, to learn from it, and to never, never repeat it. Coach shared with me that it was one of the hardest times of his life. He apologized, but he didn’t need to apologize to me. I know this weighs so heavy on his heart and he is hurting. And I do think for some of the guys he will have to earn back their trust and respect. And I think he really wants to do that. This is not something that anybody in his family takes lightly.”

"When I first saw and heard about what happened, my heart was hurting for Miss Shelley. … Coach shared with me that [this has been] one of the hardest times of his life." pic.twitter.com/Rqn9q5vH8L

Wait… it gets better…

Related: Meet The Electrician Who Leaked The Urban Meyer Bar Videos And Set The Internet Ablaze

Reactions to what Tebow had to say about Meyer were 100 percent what one would expect with those left gobsmacked by Tebow’s defense of Meyer and the other camp that thinks Urban Meyer still walks on water.

dude got a lapdance it's not end of the world.

What chance number is this for urban

Tim those were wonderful words of wisdom and I agree with everything you said. The Meyer family is lucky to have a good friends like you I know you're like one of the family to them I think that's great I'm praying for everyone

He created this hard time in his life for bad decision-making, and this is probably not the first time either. He's apologetic because he was caught not because he did it.

Why are people still valuing a baseball players opinion on football?🤦🏻‍♂️

Can both of them just go away now?