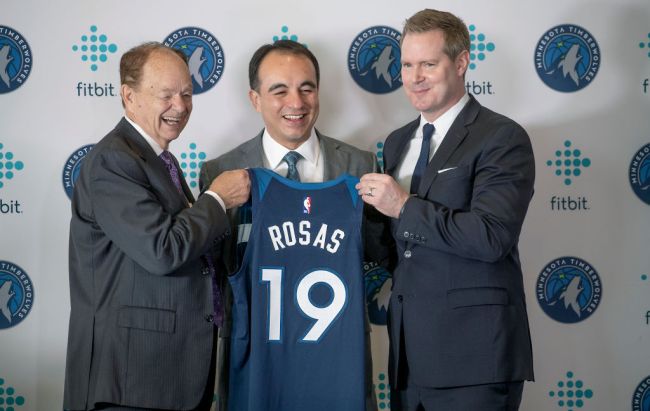 On Wednesday afternoon, the Timberwolves announced they were letting go of Rosas just a week before the start of training camp.

Just in: The Minnesota Timberwolves are parting ways with president of basketball operations Gersson Rosas, sources tell me and @JonKrawczynski.

"Today the Minnesota Timberwovles parted ways with President of Basketball Operations/GM Gersson Rosas. As an organization, we remain committed to building a winning team that our fans/city can be proud of.”

According to WCCO news, Rosas was fired for creating a “toxic culture” and having an ‘inappropriate relationship” with a female staffer.

BREAKING: Gerson Rosas is out as Timberwolves President of Basketball Operations for creating a toxic culture and an "inappropriate relationship." WATCH NOW as Mike Max has the latest on the firing on CBSN Minnesota: https://t.co/K69mHc1wEh | Read more: https://t.co/MPCRQV3UDA pic.twitter.com/VsNinAf1yB

The Athletic went on to report that the team had only learned about the relationship recently but it wasn’t the main reason he was fired but did contribute to the team’s decision to let him go.

Gersson Rosas and his downfall: Why the Timberwolves fired him just days before training camp

Reporting with ⁦@ShamsCharania⁩ on a stunning move in Minnesota https://t.co/qrm5ODg7PH

In recent days, the organization discovered that Rosas, who is married, had a consensual intimate relationship with a member of the organization, The Athletic has learned from multiple sources. It made several people within the organization uncomfortable, sources said. While this was not the reason for Rosas’ dismissal, it certainly impacted the timing.