The Nightmare Continues: A Timeline Of The Minnesota Vikings Kicking Woes Dating Back Three Decades 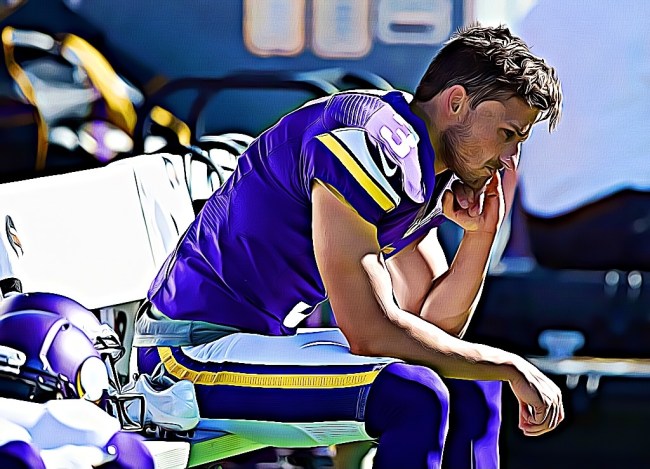 Vikings fans are built for this.

Devastating missed kicks are as Minnesotan as The Mall of America.

Let’s take a painful, yet necessary, trip down the franchise’s nightmarish kicking history.

Today in sports history January 17, 1999: Jamal Anderson and The Falcons upset the Vikings 30-27 in OT in the NFC Championship Game.

No one expected the Falcons to secure a W against a Vikings offensive juggernaut that had won all 9 of their home games that season by an average 23.22 points.

Especially when Gary Anderson, a kicker who hadn’t missed a field goal in TWO YEARS and set an NFL record for consecutive field goals the year prior, had stepped in to kick a 38-yarder that would’ve stretched the Vikings lead 10 with just 2:18 left.

The miss would ultimately (and sadly) be voted as the most memorable play in franchise history behind, edging out Brett Favre’s interception in the 2010 NFC Championship Game.

After being mercilessly ridiculed online despite converting on the most field goals in the league during the regular season, Minnesota first graders wrote Blair letters of encouragement.

Blair showed up to thank the youngsters, who remained his only friends in the entire state of Minnesota.

And… Daniel Carlson misses a 35 yarder to end it. His third miss of the day. The game will end in a tie. He was 0/3 on FG attempts. pic.twitter.com/7K5q5Uixox

Daniel Carlson, still the all-time leading scorer in SEC football history, was just one of two kickers drafted in the 2018 NFL draft.

The Vikings had high hopes for the Auburn product, cutting veteran kicker Kai Forbath to give Carlson the reigns.

That confidence was replaced with a pink slip just two games into his professional career, after shanking one field goal in regulation and two in overtime resulting in a 29–29 tie against the Green Bay Packers.

Carlson would then be picked up by the Raiders, where he’d go on to convert 94% of his field goal attempts that very same year, setting a new team record. Eeek.

Brought in to replace Carlson in 2018, Dan Bailey had a poor season before rebounding in 2019.

The Vikings, riding the high of hope, subsequently signed the Oklahoma State product to a three-year, $10 million contract in 2020, which proved to be a bad idea.

The Vikings released Bailey in March 2021, and he remains a free agent.

If you come across a Vikings fan in your travels, don’t bother giving them a hug. They’ve stopped feeling things years ago.