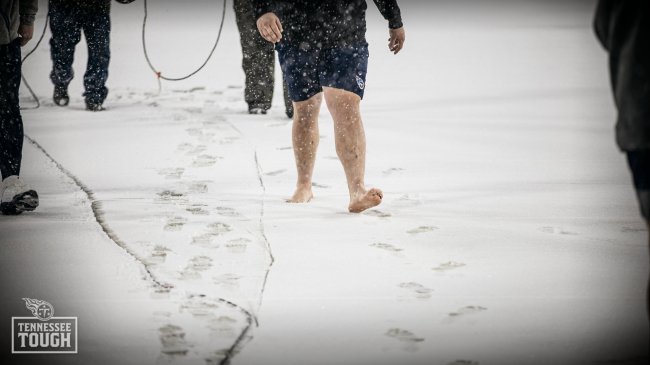 Offensive lineman don’t feel cold and Titans center Ben Jones is no exception. Prior to Sunday’s matchup with Green Bay, Brown continued his weekly tradition and walked onto the field barefoot despite the blizzard conditions. The 6-foot-3, 316-pound Alabama native didn’t grow up around snow, but it wasn’t going to stop him from donning his finest pair of shorts, leaving the shoes in the locker room and going for a stroll.

As a sophomore at Bibb County High School, Jones’ brother was the quarterback for their team and woke him up from a nap during his free period to go walk on the field before a big game. Jones said he was going to grab his shoes, but his brother said he didn’t have time for that. Bibb County ended up winning the game against a school it hadn’t beat in 10 years, and thus, the walk was born. Jones and his brother kept everything the same for sake of superstition and at the same restaurant every Friday morning and kept the routine consistent. Jones has not worn shoes during pregame ever since and always takes a saunter on the field before suiting up. He did so at the University of Georgia, with the Houston Texans and now with the Titans.

Jones has primarily played in the south, so he hasn’t experienced a snowstorm like Sunday too often, but when he does, “it’s just like being in the cold tub. Your feet go numb after about two or three minutes anyway.”