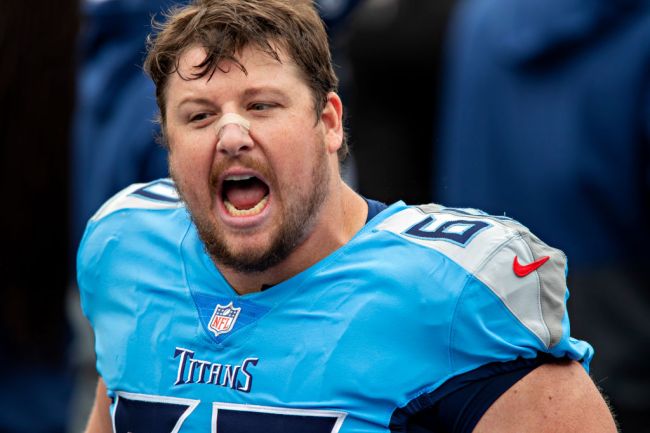 It’s no secret that linemen are the baddest dudes on the gridiron. Every week, the 300-pounders line up across from each other and knock heads at full speed.

To be in the trenches is not a glamorous job and is little recognition given to the big fellas up front. However, their job could not be more important, particularly on offense.

Without a push from the offensive line, a play cannot be successful. That’s why the Big Uglies are the toughest position group in football.

There is simply no debate. Take the Titans’ Ben Jones, for example.

Tennessee’s 32-year-old center touches the ball on every single play and takes a beating in the middle. Before each game he walks on the field barefoot to honor his brother, even in the snow.

Jones, who graduated from a high school of less than 500 in the middle of Alabama, grew up on a farm. And while growing up, he experienced some pretty wild situations and pushed through some extremely serious injuries.

He discussed his wild backstory after practice this week and it’s hard to believe how casually he says some of the things that happened to him.

Want to know why @Titans center Ben Jones is so tough on the football field?

For Jones to casually drop that he had his throat slashed after riding a bike into a barbed wire fence is insane. And not just that, but two weeks after he had his throat cut wide open, he got hit in the head by a baseball bat and had to have surgery on his brain.

Oh, and while in high school, Jones played for a year and a half with a broken leg.

He thought it was shin splints, but it was not. It was a broken leg that required surgery to remove his tibia, which is simply not a standard procedure.

Now, without a very major bone in his leg, Jones has played in 148 NFL games and is in the middle of his 10th NFL season. Jones is a superhuman.