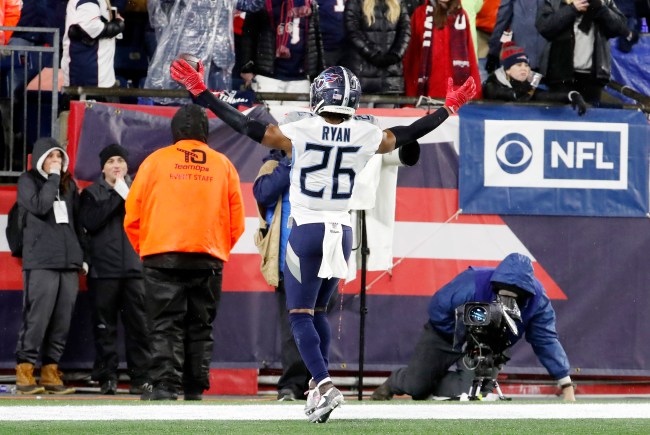 As a Patriots fan (hold your applause and undying admiration), I cannot lie and tell you I believed the 9-7 Ryan Tannehill-led Tennessee Titans were going to march into Foxborough and make it out alive. The Patriots were playing like reheated shit the entire second half of the season but the Titans against playoff mode Tom Brady? Nonsense.

Today I am humbled. Derrick Henry single-handedly bounced the defending Super Bowl champs to the earliest playoff exit in a decade, causing the entire world outside of New England to relish in the failure. It hurts, but you don’t care.

I won’t take anything away from the Titans grinding out the win, Mike Vrabel smartly using Bill Belichick’s voodoo against him, or former Patriot Logan Ryan driving the nail into the coffin with a game-ending pick six. They scored more points, and deserved to advance.

But this shit, this shit right here, is where I draw the line.

Our @Titan_Sized readers are going to want to pick up this new @breakingtco design – available in a hoodie or t-shirt!https://t.co/yekF101Ug6 pic.twitter.com/fBROjyt9cD

Have we learned anything at all from 2014 Trent Dilfer?

(The Patriots won a Super Bowl that season, and two of the following four).

Yes, New England is at a crossroads like never before. Brady is 72 years old and an unrestricted free agent for the very first time. The Patriots could be 8-8 next season or 13-3. I have no idea.

At the time of this writing, the Fansided t-shirt tweet has just nine likes and 91 comments from butthurt Patriots fans reminding the Titans they’re the Titans.

Next season is going to be WILD.