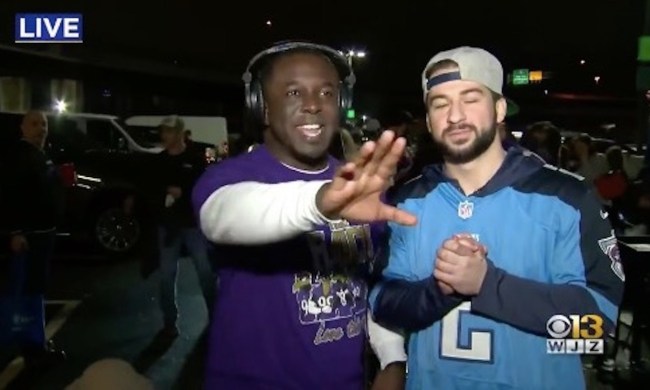 Full disclosure: what you’re about to watch is directly from a buddy of mine. But I promise you, this video is still very much worth your 60 seconds.

Usually, given the nature of my job, friends of mine will constantly send me photos and videos of their weekend shenanigans in an effort to go viral. We’ve all been friends for a long time now so I’ve seen it all. Couches on fire in the middle of the street. Skulls being willingly put through the sheetrock. Homies waking up to having their bed pissed in and their shit stolen. A half-naked man eating food from four different fast-food restaurants simultaneously.

And while enjoyable, I’ve always wondered if said enjoyment was based on the fact that I know these people, these are my guys, and not based on the actual quality of the content. And ultimately, that is why these videos never make their way to the internet. This, however, is a different story.

My buddy Vinny — despite being as New Jersey as one human can possibly be without being name Bruce Bon Jovi — is a Tenessee Titans fan. As the story goes — or at least as far as he tells it — the first game he can ever remember watching was the iconic Titans/Rams Super Bowl in ’99 and he’s been hooked ever since. Through the days of McNair and Vince Young to Jake Locker and Marcus Mariota, he’s been there.

So, when this year’s upstart Titans found themselves in the Wild Card game and just a short two-hour drive from South Jersey, he and his two buddies loaded up the truck, hopped on I-95, and went to Baltimore.

Naturally, given that Vin was wearing the sometimes ugly, sometimes gorgeous Titan blue in a sea of dark ravenous purple, he could be spotted from a mile away. Also, given his aforementioned extreme New Jerseyness, the kid basically stuck out as much as Tony Soprano would at a dietician’s office.

Knowing this very fact, Vin’s hometown buddy Max McGee — an anchor and reporter for WJZ 13 in Baltimore — called upon his old friend for a live tailgating bit. And the result is simply a reminder of why live television, especially of the local news variety, is pure magic.

my good buddy @LuckyLombardi was apart of such a glorious live interview this weekend that I simply must write about it pic.twitter.com/G0TBpdo8K3

First, let’s start with my dog’s intro to the great city of Baltimore: he hits the poor man just trying to do his job with the “is Rachel the redhead?” as if he was trying to say what’s good to her at a bar. If I’ve told you once, I’ve told you 1000 times: this kid is as Jersey as it gets — which, let’s face it, is just a nice way of me saying that he’s aggressively Italian (which I’m allowed to say because A. he’s my friend, B. I’m also an Italian from New Jersey and C. my last name is literally Italiano, which translates to Italian in Italian). And this sort of move is a direct result of that.

But I digress — just LOOK at poor Max’s face. Man knows he’s in for a shitstorm rollercoaster from this point forward and there’s nothing he can do about it. He makes that face you make when your boy says something hilarious but pretty fucked up about you other homie’s girlfriend and you know you’re not supposed to laugh but you simply cannot help yourself:

“Yeah but dude I heard her ex-boyfriend was 6’8, if you know what I mean” or “she’s cute but you ever get a whiff of her?” or “I bet he’s the little spoon in that relationship.”

And as New Found Glory once said, it was all downhill from here. Right as my man Vin was — despite having himself a day — eloquently laying out what the Titans must do to succeed (a gameplan that they very much used, by the way), a butthurt and likely worried Ravens fan blurts out “fuck the Texans!”, who, as you may have noticed, have absolutely nothing to do with this game. Nothing like trying to shit on someone else but accidentally dunking on yourself due to your own stupidity.

At that point, the plug simply had to be pulled as having drunk Balitmorians dropping fat F-bombs on live TV at 6 in the evening as the whole family is sittin’ round for some supper is not, as the kids say, the best look. But kudos to Max, as he handled the moment like a true pro, and congratulations to my buddy Vinny on the Titans big win, as he is now debating taking a flight to Kansas City so he can seek out all of the midwest’s other cute redhead newscasters (and also maybe catch the Titans game as well). #TitanUp.