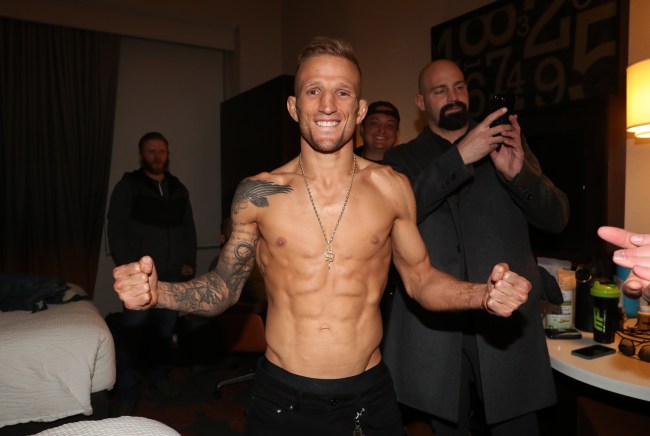 According to Jeff Novitzky, UFC’s vice president of athlete health and performance, claims that the Dillashaw can’t feign ignorance because EPO cannot enter one’s system via a contaminated supplement:

“I’m quite familiar with EPO from my days investigating professional cycling teams. It’s a very effective substance. It’s not a substance you find in contaminated supplements, it’s injectable only. You have to know what you’re doing when it enters your system.

”On a scale of seriousness in anti-doping, it’s up near the top.”

The seriousness of the doping infraction may be why it’s only the second positive EPO test of the USADA era, the other being longtime UFC veteran Gleison Tibau who was hit with a two-year suspension in 2016. At the time of the suspension, Tibau claimed his conscience was clear because he took it “without imagining I was doing something wrong.” He also said he was “100 percent sure everyone else used it.”

Mind you, back in April of 2018, Cody Garbrandt accused of Dillashaw of using EPO after claiming that Dillashaw previously taught other Team Alpha Male fighters how to use banned substances.

Cody Garbrandt posted this on Twitter in April of 2018, specifically accusing Dillashaw of using EPO. pic.twitter.com/fiBXf3Z45z

Dillashaw, who did not contest the suspension, won’t be able to compete until January of 2021. He will be 35.

Conor McGregor’s take on the situation:

I called that little snake way back.
I’m the new St. Patrick.

Who knows how this will affect the two-time former UFC 135-pound champion’s legacy, but the fighting world is pretty disappointed with the news.

More details on TJ Dillashaw. On the surface, his legacy as one of the best bantamweights in UFC history takes a huge hit. Gonna be a long 24 months for the former two-time champion. https://t.co/MQefEF82dP

I mean, T.J. Dillashaw kept insisting he could drop another ten pounds without his performance suffering as a result. And now he's been popped for EPO. That's some walking like a duck, talking like a duck stuff right there. https://t.co/odTNwgg10E

TJ Dillashaw has accepted a two-year sanction from USADA. That is a back breaker for his career. Not an ender, but a major blow.

Take a couple years to find yourself, Teej.