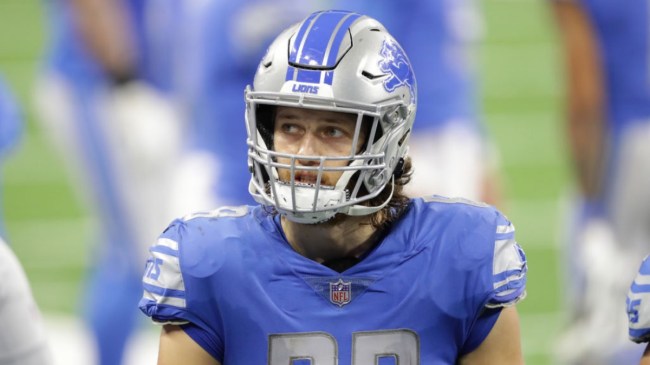 The frenzy of action at the NFL’s trade deadline got off to a fitting start yesterday.

Early on in the day, the Detroit Lions shocked football fans by trading TJ Hockenson just 3 and a half seasons after making him the 8th pick in the 2019 NFL Draft. To make it even more shocking, they traded him within their own division to the Minnesota Vikings.

They sent a pair of 4th round picks along with Hockenson and in exchange they got a 2nd rounder and a 4th rounder.

The newest member of the #Vikings: TJ Hockenson.

Today, Hockenson addressed the trade and seemed to send a parting shot to the Lions on his way out of Detroit.

T.J. Hockenson on going from Lions to Vikings: "That’s really what we’re here to do is go somewhere and win some games. That’s kind of the first time I’ve been able to say that."

Thanks to some injuries and poor quarterback play, Hockenson hasn’t quite been able to reach the potential that experts and the Detroit Lions saw for him as a rookie.

However, he is absolutely right about this being his first chance to go somewhere and win games. The Lions are a couple of seasons into a rebuild and still don’t look particularly close to competing for a playoff spot.

Meanwhile, Hockenson goes to the division-leading Vikings, who are just about locked into a playoff spot right now. He gets an upgrade at quarterback and joins an offense that is loaded with weapons.

With Hockenson, the Vikings should have an offense that is capable of making a run deep into the playoffs, which is a pretty big difference from what Hockenson has experienced so far in his career.