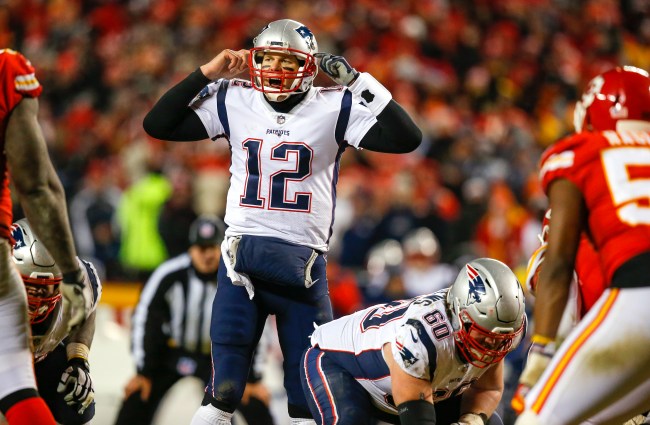 Tom Brady broke the hearts of Kansas City Chiefs fans during last season’s AFC Championship Game by coming into Arrowhead Stadium and beating the host team to reach his ninth Super Bowl. Oh, and he did it in dramatic fashion, putting his Pats on his back and carrying them to the victory in overtime, crushing the hearts of Chiefs faithful.

While Tom Brady and his Patriots eventually went on to win Super Bowl 53 following the win in the AFC Title Game, there was a little fallout from that conference championship game that got a lot of attention first — because videos showed what appeared to be a green laser in and around Brady’s face during parts of the game. Here’s a look at a video from the game that appears to show the laser being used.

Our photographer, Turner Twyman, caught someone pointing what appears to be a laser pointer in Tom Brady's face last night. Play between the "muff" that wasn't and Sorensen int. @NFL, @Patriots and @Chiefs all told me they weren't aware of the incident. pic.twitter.com/ejWBQ6i64C

After an investigation from the Chiefs and NFL, they were able to identify the perpetrator — a 64-year-old man named Dwyan Morgan — and the potential punishment for using the laser on Tom Brady could be a costly one. That’s according to Pro Football Talk, via the Kansas City Star, which reports that Morgan was officially cited for the incident, and could face a year in jail or up to a $1,000 fine. So, yeah, bringing (and using) that laser pointer on Tom Brady probably wasn’t the smartest decision the guy has ever made.

Following the incident, the Chiefs pushed hard for the fan to receive the maximum punishment, per CBS Sports, and, now with the fan identified thanks to security cameras and witnesses in the stands, Dwyan Morgan has been banned from Arrowhead Stadium for life, while also facing the previously mentioned punishments. It begs the question: Was it worth it? Probably not.

This is your friendly reminder to avoid doing stupid things like this at sporting events, as laser pointers are dangerous for a couple different reasons — one of which is that they can permanently damage players’ eyes — so stick to booing opposing players and Tom Brady rather than trying to blind them. Hopefully the potential punishment for the Chiefs fans using the laser serves as a warning sign for anyone dumb enough to even think about doing that again at future games.