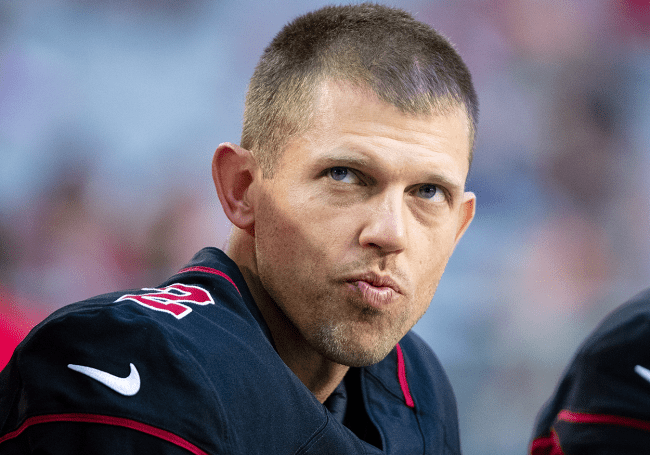 After Andrew Whitworth retired from the NFL in March, it left just one active player in the league age 40 or older— Tom Brady. That is no longer the case after a recent birthday, but it makes Brady’s agelessness even more impressive.

When the clock hit midnight on Thursday morning, punter Andy Lee turned 40 years old. The 20-year NFL veteran has spent time with the 49ers, Browns and Panthers and enters his fifth year with the Cardinals this fall.

As a result, he is the only player in the NFL at 40 years of age or older that is not Tom Brady. However, he almost did not get to this point after contemplating retirement during the offseason.

“I feel God blessed me with my talents,” Lee said. “My wife was like, ‘As long as you can continue to do it, I think it’s a disservice not to continue to play.'”

Lee was drafted in the sixth round of the 2004 NFL Draft by San Francisco and earned three First-Team All-Pro honors with the team. Since joining Arizona in 2017, Lee’s 47.6-yard punting average ranks No. 1 in the NFL and represents the highest career total in team history.

Needless to say, Andy Lee is a legend.

In an effort to extend his career as long as he can, the newly-minted 40-year-old has changed his diet to consist of lean meats, fruits and vegetables. But he won’t give up his favorite snack.

“I’m not getting rid of Doritos,” Lee said. “I love them. I also eat a ton of ketchup, which is a lot of sugar. But with Doritos, I eat a bag once a day.”

However, because his birthday has occurred during camp ever year since he was an 18-year-old freshman at the University of Pittsburgh, there many not be any cake involved with his day on Thursday. It has become just another day, but it doesn’t mean that he doesn’t understand the magnitude of his 40th.

“It means I’m officially old,” Lee said. “But I think it means a lot to show my kids what you can achieve if you work hard and do what you’re supposed to do.”

For Lee to be playing at 40 years old is impressive. However, it makes Brady’s longevity even more so.

Lee is a punter. He does not get hit often, if ever. Brady is five years older and gets hit fairly frequently in comparison to Lee.

It is an incredible feat for both 40+ year olds, but it is yet to be seen how long that either will stay in the league beyond 2022.