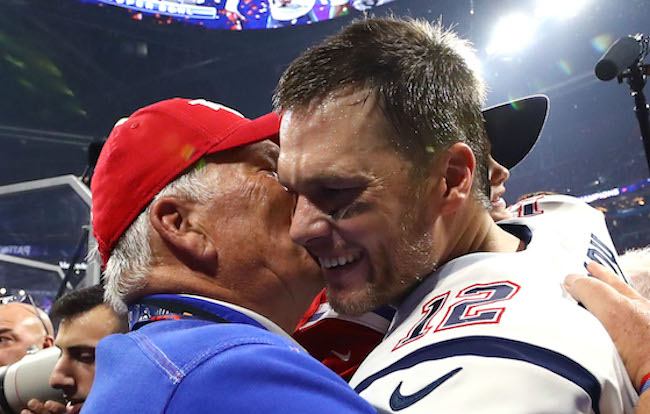 Over the weekend, the New England Patriots clinched the AFC East for the eleventh year in a row and will head to the playoffs yet again as they attempt to defend their Super Bowl title in what promises to be one of the more competitive postseasons the conference has seen in recent memory.

While history has shown it would be foolish to write off Brady, he’s facing some stiff competition in the form of Lamar Jackson and Patrick Mahomes, both of whom appear to be poised to compete for the throne that will be vacated when the quarterback inevitably reaches the end of his career.

Brady has previously said he thinks he can play until he’s 45 but his age has begun to show a bit this year thanks to no small part to the anemic offense he’s been forced to rely on, which has caused some people to speculate he could end up taking his talents elsewhere when the season wraps up—including his dad.

A couple of weeks ago, Tom Sr. hinted his son may be interested in pursuing other options but denied the quarterback had given him any insight into the situation, and now, it looks like we can confirm he wasn’t privy to any inside information according to what Brady had to say during an interview with WEEI on Monday.

On Sunday, Brady Sr. revealed his son had banned him from talking to the media while violating that very ban during an interview with the Boston Globe and Brady Jr. was asked to shed some light on that story during his weekly radio appearance.

The Patriots legend acknowledged he asked his dad to refrain from relaying certain pieces of information to the press but ultimately realized he was fighting a losing battle that has forced him to keep his father in the dark when it comes to sensitive issues:

“Well, apparently he doesn’t listen because he’s still talking to the media.

My dad, he’s just an amazing man. He’s very forthcoming with information, so I keep telling him, ‘Dad, of course they are going to keep calling because you keep talking.’ When he speaks (everyone) thinks I am speaking, but I am not speaking. I said, ’It’s hard for me to tell you anything…’

What I have learned is I just can’t tell my dad anything. He has his own opinions and dads do what dads do. I love my dad. He’s an incredible man and he’s been my role model my whole life. But, he does like to talk.”

If I was the son of arguably the best quarterback of all time I’d have trouble keeping my mouth shut about him too but I can certainly understand why Brady isn’t super thrilled with his dad’s inability to keep things close to the chest.

Sure, it might not be an ideal situation but it could certainly be worse—just ask any of LaVar Ball’s sons.