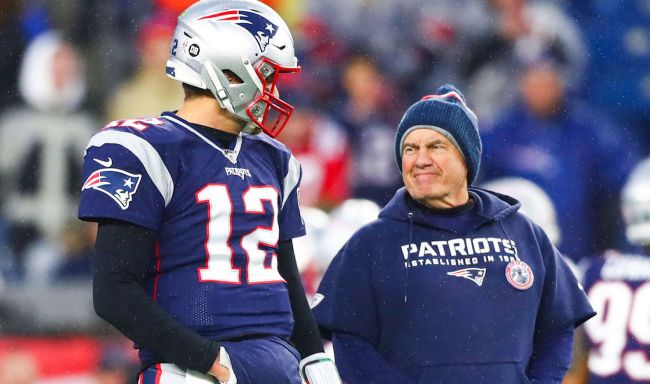 Now entering their third seasons without each other, it would appear that Tom Brady currently has the edge in his divorce from Bill Belichick, as TB12, of course, won his seventh Super Bowl title with the Buccaneers during his first season in Tampa Bay. Belichick, on the other hand, missed the playoffs in his first year without Brady and was bounced out of the playoffs in the Wild Card round this past season.

Despite the perceived hard feelings between the legendary coach and QB, the 44-year-old Brady was recently full of praise for the 70-year-old Belichick as he called him the “most amazing” coach he’s ever been around. Brady made the comment during last week’s The Match, which featured him teeing off alongside Aaron Rodgers, Patrick Mahomes, and Josh Allen.

“I love football and I care a lot about football, too. I’m always going to be involved in it one way or the other,” Brady said in the interview that aired after “The Match” golf event. “I was thinking about the opportunity to travel around and see these guys on different Friday afternoons and watching them practice and saying, ‘Hey, here’s a couple of things that worked for me.’

Perhaps now that he’s finally flirted with retirement, Brady is beginning to feel a bit nostalgic about his time with Darth Belichick on the Patriots Death Star.

RELATED: Tom Brady Fails Miserably While Trying To Speak German Ahead Of 2022 NFL Game In Munich